Fugitive cleric's dad to U.S.: Give me time to talk him out of hiding 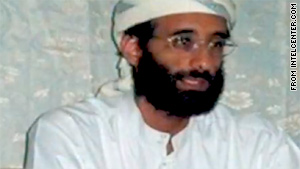 A U.S. official confirmed this week that the U.S. government has targeted Anwar al-Awlaki for killing or capture.
STORY HIGHLIGHTS
RELATED TOPICS

Islamabad, Pakistan (CNN) -- The father of a fugitive Muslim-American cleric is asking the United States to suspend its manhunt for his son for three months.

Nasser al-Awlaki, the father of Anwar al-Awlaki, said that if the U.S. suspends the "kill or capture" order on his son, he will do his best to persuade him to come out of hiding.

CNN interviewed al-Awlaki by phone and e-mail when he was in Yemen.

Al-Awlaki also called on his son to "... declare that he is not going to make any specific sermon or statements against the United States of America," during this three-month period.

A U.S. official confirmed on Wednesday that the U.S. government has targeted Anwar al-Awlaki for killing or capture.

The official, who is not authorized to speak publicly about the matter, said, "We would be remiss if we didn't find ways to pursue someone who is a serious threat to this country and has plotted against Americans."

The elder al-Awlaki, an agricultural economist, said he was "distressed and disappointed" to learn that his son had been singled out for killing or capture.

"What they have decided is to hunt for Anwar al-Awlaki and kill him by a drone as they do every day in Pakistan. I think this kind of policy will only make the U.S. look more ugly to Muslims all over the world," he said.

"The U.S. is a powerful country and has the means to reach anyone anywhere in the world, but is killing people -- and especially American citizens -- without legal justification the right way to show American justice and power? I think not."

Anwar al-Awlaki is believed to be hiding in the hills of southern Yemen with the protection of his very powerful family tribe.

According to U.S. intelligence officials, Anwar al-Awlaki's influence and reach, especially with English-speaking Muslims on the Internet, is still quite potent.

His sermons and recordings have been found on the computers of at least a dozen terror suspects in the United States and Britain.

The cleric has admitted to having e-mail communication with Maj. Nidal Hassan, the man accused of gunning down 13 people at Fort Hood in Texas last November. He has also admitted to having communicated with the Nigerian suspect in the December 25 airliner bomb plot, Umar Farouk Abdulmutallab, although he denies any role in the attack.