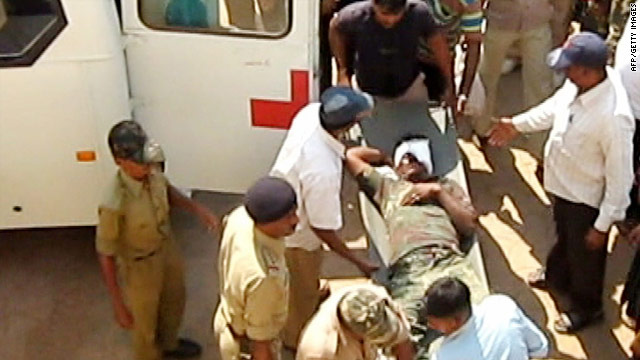 About 200 officers from the federal Central Reserve Police Force (CRPF) and a local police group were conducting a road inspection in Chhattisgarh state's Dantewada district when the assault occurred, according to officials.

The attack and subsequent shootout lasted four hours, she said. Authorities launched rescue operations after the shootout ended, she added.

There was no immediate report of casualties on the Maoist side, Kangale added. The road inspection by the officers was being carried out ahead of a planned transportation of food to a camp of internally-displaced people, she explained.

The Maoists, on the other hand, have claimed since the 1960s to be fighting for the dispossessed.

In February, India's home minister P. Chidambaram acknowledged that more than 900 people, including almost 600 civilians, were killed in Maoist-related incidents in 2009.

Some 200 suspected rebels were also slain as forces moved into areas under insurgent control, he said.

"I am confident that the state governments concerned will gradually gain the upper hand and re-establish the authority of the civil administration," Chidambaram told an internal security conference on February 7.

Indian Prime Minister Manmohan Singh, however, conceded last year that the nation's fight with the Maoists had fallen short of objectives.

Maoists enjoy support not only in the poorest areas and in tribal communities but also among youth and the intelligentsia, officials suspect.

"We have not achieved as much success as we would have liked in containing this menace," Singh said last September. "It is a matter of concern that, despite our efforts, the level of violence in the affected states continues to rise."

In addition to targeting police, alleged police informers and people they call "class enemies," the rebels are also believed to be attacking infrastructure such as roads, bridges, railways, and power and telecommunication networks.