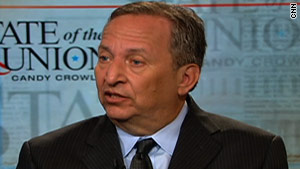 Lawrence Summers, director of the National Economic Council, said the timing of the report was not right.

Lawrence Summers, director of the National Economic Council, told the CNN program "State of the Union" that major international meetings coming up, including a G-20 economic gathering that will include China, provide the opportunity to resolve trade differences that could be exacerbated if the exchange-rate report were released on April 15 as scheduled.

Summers said the upcoming meetings offer opportunities to engage China and other countries that have large trade surpluses with the United States.

U.S Treasury Secretary Tim Geithner announced the delay of the report to Congress on Saturday. Many lawmakers had hoped the report would publicly admonish China for allegedly manipulating its currency to the detriment of the United States.

Geithner, explaining the delay, said the upcoming meetings are "the best avenue for advancing U.S. interests at this time."

On Sunday, Summers denied that the delayed report had any connection to the U.S. desire for China to support tougher sanctions against Iran over the Tehran government's refusal to comply with international regulations regarding its nuclear energy program. His comment was in response to a question on the ABC program "This Week."

China has opposed more sanctions, but last week signaled a willingness to negotiate the issue within the U.N. Security Council, according to Susan Rice, the U.S. permanent representative to the United Nations.

Lawmakers from both parties have called on the Obama administration to speak out against China's refusal to let its currency appreciate. China has kept its yuan at about 6.83 to the dollar for almost two years. Many U.S. economists say the currency is undervalued by as much as 40 percent.

Keeping its currency low makes China's goods cheaper on the world market and more likely to be purchased by other countries. But, analysts say, it hurts American businesses, which cannot compete.

Some analysts have argued that this is costing the United States 1.5 million jobs and impeding the country's economic recovery.

"Everyone knows China is manipulating the value of its currency to gain an unfair advantage in international trade," said Iowa Sen. Chuck Grassley, adding he was disappointed in the treasury secretary's decision.

"If we want the Chinese to take us seriously, we need to be willing to say so in public," said Grassley, the ranking Republican member of the Senate Finance Committee. "The past few years have proven that denying the problem doesn't solve anything."

Chinese officials have insisted the United States is using Beijing as a scapegoat for its own economic problems.

Premier Wen Jiabao has been equally stern in his response.

"We oppose the practice of finger-pointing among countries or strong-arm measures to force other countries to appreciate currencies," he told reporters last month.

In his statement, Geithner acknowledged China has maintained an "inflexible exchange rate."

"A move by China to a more market-oriented exchange rate will make an essential contribution to global rebalancing," he said.

Rep. Sander Levin, chairman of the House Ways and Means Committee, said the delay was meant to see if the international community can address the issue in the coming months.

"If the multilateral effort does not result in China's making significant changes, the administration and Congress will have no choice but to take appropriate action," said Levin, a Democratic lawmaker from Michigan.