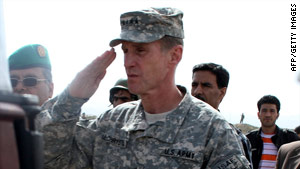 Gen. Stanley McChrystal has said the Kandahar operation will be different from the recent push into Marjah.
STORY HIGHLIGHTS
RELATED TOPICS

Washington (CNN) -- U.S. and coalition forces in Afghanistan have their sights set on a June offensive designed to gain control of the southern city of Kandahar from the Taliban, according to U.S. military officials.

The assault on the Taliban's spiritual center will be the second major military operation to rid a southern Afghan city of Taliban control as the U.S. ratchets up pressure under the command of Gen. Stanley McChrystal. Officials said the main goal of the offensive is removing the Taliban before the Muslim holy month of Ramadan, which begins in August.

While a coming assault on Kandahar has not been a big secret, U.S. and NATO officials have not disclosed the timetable, only saying it would come sometime this year.

The U.S. military officials, who did not want to be identified because they were not authorized to talk about the mission, said they would expect the mission to last two months.

At a briefing to reporters Tuesday, Pentagon spokesman Geoff Morrell would not confirm a timetable for the overall Kandahar offensive but said an attempt to remove the Taliban from Kandahar had already begun.

"They've [operations] been months in the making, they began really when the Stryker brigade arrived down south and began their work on trying to secure the routes in and out of Kandahar," Morrell said, referring to some of the 30,000 additional U.S. troops President Obama ordered to Afghanistan last year.

"A lot of the preparatory work, the shaping operations that will be essential to ultimate success in Kandahar are under way and have been under way, frankly, for months now," Morrell said.

He also said that U.S. military special operations forces have been going after mid- and high-level Taliban targets, as well as trying to persuade local tribes to work with the U.S. military and Afghan government.

Kandahar has long been a trouble area for the U.S. and coalition forces and for the government of Afghan President Hamid Karzai. The city had been the governing capital of Afghanistan, while the Taliban ruled the country before the 2001 U.S. invasion. It remains steadfastly true to the Taliban movement, hiding many of its senior officials among a loyal population.

Of the 30,000 additional U.S. troops sent by Obama, thousands will be moved to Kandahar to participate in the operation, the officials said. It is unclear exactly how they will be used, but many of them will be partnered with Afghan police as a security force, the officials said.