From Andreena Narayan, for CNN 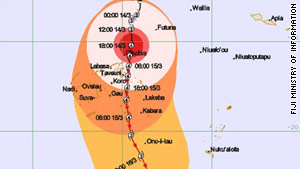 (CNN) -- Tropical Cyclone Tomas battered Fiji's northern islands on Monday evening with gusts of up to 275 km/h (170 mph) and heavy rain, but weather officials had not received immediate reports of damage.

The Category 4 storm is the second-most destructive on a five-point scale. As it heads southeast, it is expected to sideswipe the main island, Viti Levu. The South Pacific nation's capital, Suva, is on that island.

"The closest it will come is 200 km (124 miles) to the east of Suva," said Alipate Waqaicelua, forecaster for the Nadi Tropical Cyclone Center.

Still, the storm inundated the capital with heavy rain and strong winds. Authorities imposed a nighttime curfew. Schools have been ordered closed till Thursday, and banks were shuttered till Tuesday, said resident Moses Waqavonovono.

"Squatter houses have been blown away in the gusting winds," he said. "The stronger structures will take a hard hitting tomorrow."