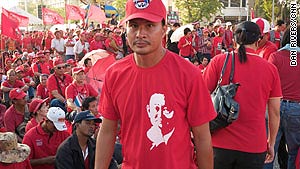 Bangkok, Thailand (CNN) -- Tens of thousands of protesters poured into the center of Bangkok Sunday, bringing the city to a virtual standstill in an effort to topple the Thailand government.

The anti-government demonstrations began Friday and were expected to reach their peak over the weekend as a Monday ultimatum -- set by the "red shirt" opposition protesters -- approached for Prime Minister Abhisit Vejjajiva to leave office.

Protesters, without giving specifics, have warned that they will increase pressure if the ultimatum is not met. So far, the rallies have been largely peaceful.

The protesters are supporters of former Prime Minister Thaksin Shinawatra, who was ousted in a bloodless military coup in 2006. Thaksin was the only Thai prime minister to serve a full-term in office and remains hugely popular.

The protesters say that current Prime Minister Abhisit was not democratically elected and have demanded that he call new elections.

About 50,000 security forces were mobilized ahead of the protests and additional soldiers were guarding Abhisit, who is at a safe house at a military compound.

Since Thaksin's ouster, Thailand has endured widespread political unrest that has pitted Thaksin loyalists against Abhisit's supporters. Two people were killed and at least 135 wounded in riots in April 2009 when protesters clashed with demonstrators supporting the government.