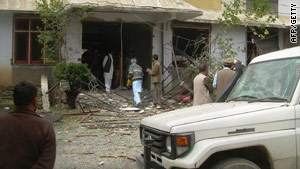 World Vision offices were badly damaged by the attack.

Militants were responsible for the attack on the World Vision office near the town of Oghi, police official Rasul Shah said.

Gunmen entered the organization's compound, threw grenades, opened fire on staff inside and detonated a homemade bomb before leaving, World Vision said in a statement. The group's relief work in Pakistan is carried out by local citizens.

All the victims of the attack were Pakistani citizens, police said.

"We are suspending operations and our focus right now is on the well-being of the staff, those staff members who survived the cruel attack," World Vision spokesman Rienk van Velzen told CNN in a telephone interview.

The numbers of those injured varied.

Local police said five were hurt. World Vision said eight employees were hospitalized with injuries, four of them in critical, but stable, condition.

World Vision has a project there that helps refugees who fled fighting in the Swat Valley area.

"Those who kill humanitarian workers must be reminded that they are not only killing their own country's residents, but also people seeking to improve the lives of victims of poverty and injustice," the World Vision statement said.

Van Velzen said the group has received reports that the local population is "very upset" about the attack.

Van Velzen said it's not known why militants targeted the aid organization.

"We will never be able to read the minds of militant groups, extremists," he said. "We try to work with the government toward stability and certain elements are against stability."

The organization had not received threatening letters before the attack, the statement said.

World Vision has worked in relief efforts in Pakistan since 1992, and it began providing emergency relief assistance and community development initiatives in collaboration with other aid groups in the North West Frontier Province and Punjab Province in 2001, according to its Web site. The group expanded its operations after the October 2005 there earthquake left at least 86,000 people dead.

"We committed ourselves to the people of Pakistan," van Velzen said. "We were working on rebuilding communities and schools and providing proper education, health care and livelihoods for families."

A drone fired five missiles at a vehicle in the village of Khadarkhel in North Waziristan, a local government official and the two intelligence officials said. When other suspected militants arrived at the blast site to help, a sixth missile was fired, the intelligence officials said.The officials asked not to be named because they are not authorized to speak to the media.North Waziristan is located near Pakistan's border with Afghanistan, and has been a haven for Islamic extremists.