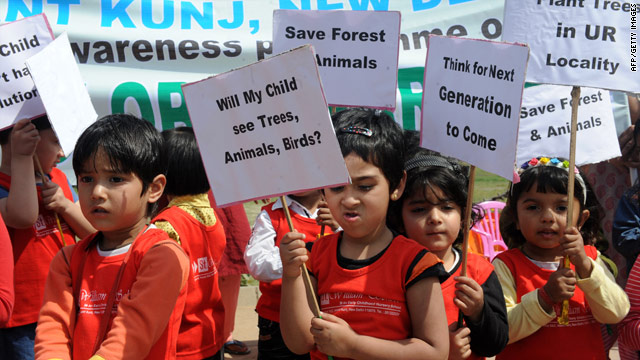 Children in India take part in a rally in New Delhi to urge others to protect the environment on March 10, 2010.
STORY HIGHLIGHTS
RELATED TOPICS

New Delhi, India (CNN) -- India has signed onto a U.N. climate change agreement aimed at reducing global greenhouse gas emissions, becoming one of the last major nations to do so, the country's environment minister told parliament.

India agreed to the deal after the United Nations Framework Convention on Climate Change (UNFCCC) asked the South Asian nation in February if it wanted to be listed as a party to the agreement known as the Copenhagen Accord, Jairam Ramesh said Tuesday.

"After careful consideration, India has agreed to such a listing," Ramesh told lawmakers.

As Asia's third largest economy, the country has set a goal of reducing carbon emissions 20 to 25 percent by 2020. The goal is based on 2005 levels.

Ramesh said India agreed to the accord on three conditions, but primarily because it's a legally non-binding agreement.

He reiterated his country's position that it believes the pact has no separate negotiations outside the UNFCCC.

"Third, the purpose of the Copenhagen Accord is to bring about a consensus in the existing and on-going, two-track multilateral negotiations process under the UNFCCC," Ramesh said.

By signing the Copenhagen Accord, nations commit to limiting the global temperature rise to below two degrees Celsius, reducing greenhouse gas emissions across the developed and the developing world, and funding $100 billion a year toward helping developing countries achieve these goals by 2020.

Nearly 200 nations signed the accord during negotiations that ended in December.

At the time, U.N. Secretary-General Ban Ki-moon called the agreement an overall success, but critics have questioned its effectiveness because it is not legally binding -- the same reason India cited in joining the accord.