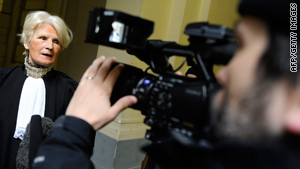 (CNN) -- A trial for nine terror suspects accused of having ties to al Qaeda opened in a Belgian court Monday, with the main defendant suspected of nearly launching a terror attack just hours before a 2008 European Union summit in Brussels.

That defendant, Malika el Aroud, and her husband, Moez Garsallaoui, are charged with heading a terrorist cell linked to al Qaeda and running a Web site that glorified suicide bombings and urged young Muslims to sacrifice themselves in jihad, or holy war.

The couple has long enjoyed a notorious reputation among European counterterrorism services. El Aroud's previous husband, Abdessattar Dahmane, had assassinated Ahmed Shah Massoud, the head of the anti-Taliban Northern Alliance, in a suicide bombing ordered by Osama bin Laden two days before the September 11, 2001, attacks on the United States.

When CNN interviewed the couple in 2006, el Aroud showed how she administered a pro-al Qaeda Web forum called Minbar SOS, which included pro-al Qaeda postings and propaganda videos. Belgian investigators say the Web site played an important role in the radicalization of members of the French-Belgian group.

The Belgian-Moroccan woman was considered an "al Qaeda living legend" upon her arrest on December 11, 2008, as leaders of the European Union's 27 member states arrived in Brussels for the summit. Fourteen people were arrested early that morning in one of the largest counterterrorism operations in Belgian history. Six eventually were charged with participation in a terrorist group. The others were released.

At the time, officials told CNN that the alleged cell had connections to a senior al Qaeda operative who helped orchestrate the 2006 "Airline Plot," widely recognized as al Qaeda's most serious terror attempt since 9/11. A senior counterterrorism source with detailed knowledge of the investigation said the alleged cell was connected to the top ranks of al Qaeda through Garsallaoui, a Tunisian Islamist militant who left Belgium for the tribal areas of Pakistan in late 2007.

According to Belgian counterterrorism officials, Garsallaoui, a Tunisian citizen, relied heavily on the Internet to recruit members to the group.

The other defendants are Belgian citizens: Hicham Beyayo, Ali El Ghanouti, Yussuf Said Harrizi, Hicham Bouhali Zrioul, Jean Trefois, Abdullazziz Bastin, and Mohammed Bastin. Garsallaoui, who has yet to be captured, and Zrioul, who has fled on bail, will be tried in absentia.

Defense lawyer Christophe Marchand said the trial is scheduled to take place four days a week, from Monday to March 26. A ruling is expected toward the end of April.

The use of the Internet by the suspected al Qaeda cell was instrumental in getting approval recently for a law that will give state security agents power to monitor Internet usage. The law will take effect at the end of the year. While the country's intelligence services previously had some of the weakest Internet laws at its disposal, it now has some of the strongest regulations in the world.

"One of the people involved in the case in Belgium -- I'd rather not name her -- is coming forward as someone who is seeking to defend jihad ideology by what's on the Internet," Alain Winants, the head of Belgian intelligence, told CNN in a recent interview. "I think that a lot of individuals in these cases -- and Bryant Neal Vinas, too -- have been wrapped up by radicalization on Internet site."

Vinas, a native of New York, pleaded pleaded guilty in January 2009 to charges of aiding al Qaeda and helping attack a U.S. military base in Afghanistan.

Authorities accused Vinas of firing rockets at the base along with others in September 2008, and of providing al Qaeda with information about the New York transit system and the Long Island Railroad. Vinas, 27, was arrested in Pakistan late in 2008 and is awaiting sentencing.

He told investigators that about the time he became an al Qaeda member, he came across several Belgian and French militants. He said he met in Waziristan in northwest Pakistan with at least three members of this group, including Garsallaoui and Zrioul, a Belgian-Moroccan who once worked as a taxi driver in Brussels.

In June 2008, Garsallaoui wrote an e-mail to his wife, intercepted by U.S. counterterrorism agencies, in which he claimed to have killed several Americans in Afghanistan, according to Belgian legal documents.

However, Garsallaoui's list of enemies does not seem to have been limited to U.S. troops in Afghanistan. On May 11, 2009, he issued this threat to Belgium authorities on his wife's Web site: "If you thought that you could pressure me to slow down through the arrest of my wife, you were wrong. It won't stop me fulfilling my objectives. ... The place of my wife in my heart and the heart of all the mujahedeen is greater than ever. ... Surprises are sure to be in store for you in the days ahead. Those who laugh last, laugh more."

CNN's Nic Robertson and Paul Cruickshank contributed to this report.