Gates in Afghanistan on unannounced visit 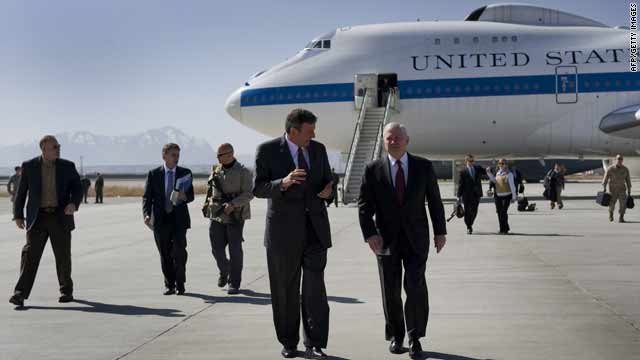 Kabul, Afghanistan (CNN) -- U.S. Secretary of Defense Robert Gates arrived in Afghanistan on Monday morning on an unannounced visit, as NATO-led coalition forces are pressing an offensive in the nation's south.

Gates was scheduled to meet with Afghan President Hamid Karzai and Gen. Stanley McChrystal, the U.S. commander in Afghanistan.

Coalition forces are battling Taliban fighters around the town of Marjah in southern Helmand province.

Dubbed Operation Moshtarak, the offensive was launched in February by an international coalition of 15,000 troops, including Afghans, Americans, Britons, Canadians, Danes and Estonians.

Gates told reporters that he was going to Afghanistan to "get an update on the campaign, not only in Marjah but the next steps as we look to spring, summer and fall."

Long a bastion of pro-Taliban sentiment and awash with the opium used to fund the insurgency, the Marjah region has been known as the heroin breadbasket of Afghanistan and as a place where the Taliban had set up a shadow government.

The hope now is for the United States to persuade the locals to change their crops from poppies -- grown to produce opium for the Taliban's drug trade -- and instead grow crops such as wheat, which can help them survive and provide income as well.

Karzai visited Marjah on Sunday with McChrystal to see what gains have been made in the military offensive.

Gates arrived in Afghanistan on the same day that Iranian President Mahmoud Ahmadinejad was supposed to have visited. Iranian state-run media reported Monday that Ahmadinejad's trip had been postponed until mid-March.

"Iran is playing a double game in Afghanistan," Gates told reporters on the flight to Afghanistan. "They want to maintain a good relationship with the Afghan government. They also want to do everything they possibly can to hurt us, or for us not to be successful."

Gates said the Tehran government "will help the Taliban, whether they are providing money" or "some low level of support."

The United States and its European allies are making a strong pitch to members of the U.N. Security Council for new sanctions that they say will be "smart and effective" as Iran moves forward with its nuclear program. Those proposed new sanctions reportedly would target Iran's banking, shipping and insurance sectors.

But it's unclear whether China, a veto-wielding member of the U.N. Security Council, will support the proposals.

The United States and other nations think Iran has undertaken a program to build nuclear weapons, an assertion Iran denies, saying the goal of the program is to produce domestic power.