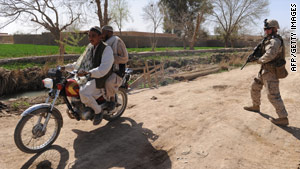 Kabul, Afghanistan (CNN) -- Afghan President Hamid Karzai made an unannounced visit to Marjah on Sunday to see the gains made after a massive military offensive by Afghan and international troops to wrest control of the southern city from the Taliban.

Karzai toured the city in Helmand province with Gen. Stanley McChrystal, the U.S. commander in Afghanistan.

Marjah residents remain skeptical of U.S. troops and the newly installed local government that has moved in and taken over, said U.S. Marine Corps Brig. Gen. Larry Nicholson, who was in charge of the Marjah offensive.

They want to know what Karzai's government is going to be able to do for them, he said.

"We have a very narrow window of opportunity here in Marjah to make that first impression and you get one shot at it," he said.

Dubbed Operation Moshtarak, the offensive was launched last month by an international coalition of 15,000 troops including Afghans, Americans, Britons, Canadians, Danes, and Estonians.

The Marjah region has long been a bastion of pro-Taliban sentiment and is where the Taliban had set up a shadow government. It is a key area in Afghanistan's heroin trade and full of the opium used to fund the insurgency.

The hope now is for the United States to persuade the locals to change their crops from poppies -- grown to produce opium for the Taliban's drug trade -- and instead grow crops like wheat, which can help them survive and provide income as well.

Nicholson said for years, the Taliban-run town had no police force. Now, the Afghan government is in the process of recruiting Marjah citizens to join a new police force that would be trained by the Marines.

The general had no timetable on how long it would take to truly secure the town.

Meanwhile, in Baghlan province, about 50 insurgents, including more than a dozen Taliban, were killed in fighting between two rebel groups, the province's governor said Sunday.

Some 35 fighters of the Hezb-e-Eslami, or Islamic Party, and 13 Taliban died in the fighting, which began Saturday and continued into Sunday, Mohammed Akbar Barikzai told CNN.

Apparently some bystanders also were killed or wounded, Barikzai said, adding he could not put an exact number on the civilian casualties.

Hezb-e-Eslami is an insurgent group loyal to warlord Gulbeddin Hekmatyar. They are enemies of the Taliban, but it is rare that the anti-government groups fight each other.

A group of 25 Hezb-e-Eslami fighters including their commander surrendered to Afghan National Police on Sunday, the governor said.

Separately, two children were killed and two were hurt in an explosion while they were playing in Kandahar province, provincial spokesman Zalmay Ayoubi said Sunday.

The explosive device was in a bag that blew up while the children were playing, the Interior Ministry said in a press release. The injured children were transferred to a hospital for treatment.

One was killed by small arms fire and the other by an improvised explosive device, NATO said.

The identities and nationalities of the service members were not immediately released, pending notification of the relevant national authorities, the statement said.