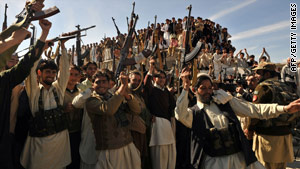 Taliban commanders Mullah Faqir Mohammad and Qari Ziaur Rehman were also targets, but Malik could not confirm whether they were killed in the assault.

Fateh Mohammad, the Taliban leader in Pakistan's Swat Valley who fled the area when the military launched an offensive there nearly a year ago, was killed by helicopter gunships, Malik said.

The strikes targeted Mohmand, one of seven districts in Pakistan's tribal region along the Afghan border.

Fateh Mohammad had been moving between Mohmand and neighboring Bajaur to the north since fleeing the tribal region, officials said.

Mullah Faqir Mohammad fled to Mohmand from Bajaur during the military offensive there in August 2008, Maj. Gen. Tariq Khan told reporters this week. The military captured the Taliban headquarters in Bajaur.

Afghan Taliban leader Rehman has ties to the Pakistani Taliban in both Bajaur and Mohmand. He leads fighters in Afghanistan's Kunar province.

Military officials say many militants escaped to Mohmand after the start of the military offensive targeting the Taliban in Bajaur.

The Pakistani military official said about 25 militants were killed in Friday's airstrike. The official asked not to be identified because he is not authorized to speak to the media.

The government's assault Friday was part of its ongoing effort to rout the Taliban from within its borders.

This week, a senior Afghan Taliban leader was arrested in Karachi, Pakistan, a senior Pakistani military official said. It was the sixth such high-profile Taliban arrest in the past month, official said. He also asked not to be identified because he is not authorized to speak to the media.