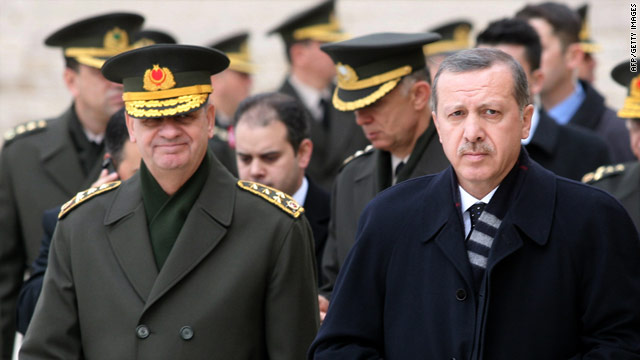 Among the suspects is Col. Huseyin Ozcoban, the commander of the paramilitary gendarme force in the central province of Konya. Anatolian reports he was arrested while on holiday in Istanbul on Friday morning.

Scores of military leaders have been imprisoned or charged as part of "Sledgehammer," an alleged plot hatched by the staunchly secular military to plant bombs in mosques to destabilize the country's elected and Islamist-inspired government.

When contacted directly by CNN, Turkish police and prosecutors refused to comment on the investigations and arrests.

An on-duty officer answered the phone when CNN called the gendarme headquarters at Konya provincial headquarters, but then hung up the phone before answering any questions.

An officer at the gendarme headquarters in Istanbul also refused to comment on the latest detentions.

Turkey's president held crisis talks Thursday with the prime minister and top military general and sought to calm tensions following the detention of around 50 high-ranking active duty and retired military commanders in connection to the alleged coup plot.

President Abdullah Gul tried to reassure the population. His office released a short statement urging the public to "be confident that the matters on the agenda are going to be resolved within the constitutional order... and everyone will act responsibly to ensure our institutions will not be hurt."

As the private meeting was underway in the Turkish capital, the retired commanders of Turkey's air force and navy along with the former general in charge of Turkey's 1st Army were taken in for questioning in an Istanbul court.

Assistant Chief Prosecutor Turan Colakkadi said the generals were released after questioning was completed. He added, "the investigation is ongoing, but the generals are released for now." General Ergin Saygun was forbidden to travel abroad.

The commander of the armed forces, General Ilker Basbug, angrily denied the accusations in a fist-pounding performance.

"It's a first in Turkey's history," said Yasemin Congar, the deputy editor-in-chief of Taraf, in an interview with CNN.

The military has a long history of dominating Turkish politics.

Generals overthrew at least four civilian governments over the course of the last half century.

But the armed forces have seen their influence gradually eclipsed since Prime Minister Recep Tayyip Erdogan's Justice and Development Party swept to power after winning parliamentary elections in 2002.

Since then, the generals, as well as other elements of Turkey's traditional secular establishment, have periodically clashed with Erdogan, whose party has its roots in political Islam.

But the prime minister repeatedly has outflanked the secularists by continuing to win big in popular elections.

And, more then a year ago, prosecutors began detaining hundreds of suspects, including several retired generals, as part of an investigation into another alleged secular plot against the government.

The credibility of that investigation has been questioned, however, after journalists, academics and civil society leaders have been detained for months at a time. Some appeared to have done little more then criticize Erdogan's government.

"There are some concerns that perhaps some of the allegations may be too far fetched and seem to be getting more dramatic with the passage of time," said Fadi Hakura, a Turkey expert at the British foreign policy institute the Chatham House.

"The emerging pattern seems to be a power struggle between two groups who are trying to control the state," Hakura added. "One is the Islamic-rooted Justice and Development Party and the other is the military establishment. At the present time it is the civilian government that has the upper hand."

Turkey's semi-official Anatolian Agency reported Thursday that a low-ranking naval officer had been arrested for allegedly allowing soldiers to use insults against the prime minister as a password for entering a military base.

CNN's Talia Kayali and Barbara Starr contributed to this report.