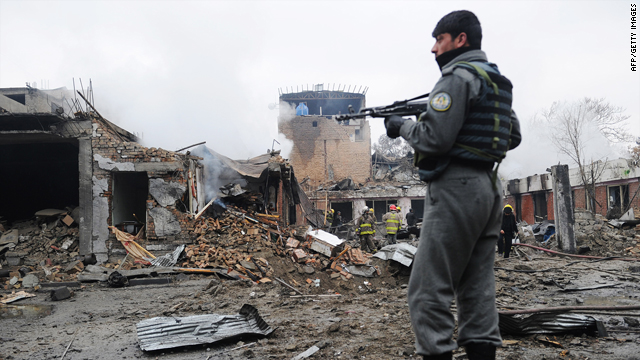 An Afghan security officer stands guard as firemen inspect the debris at the site of a blast in the Shahr-E-Naw area in the heart of the capital Kabul on Friday.
STORY HIGHLIGHTS

Authorities were trying to determine how many people died and the nationalities of those slain.

Kabir Al-Amiri, an employee at Kabul hospital, said eight Indians and one Pakistani national were among the dead. Afghan Interior Ministry officials said an Italian was killed, and the Indian Embassy said four Indians were killed in the attack.

The Taliban claimed responsibility for the attacks near the Safi Landmark Hotel in the neighborhood of Shahr-E-Naw, where there are a number of government buildings and U.N. offices as well as supermarkets, banks, diplomatic facilities and villas for well-to-do Afghans.

Video: Attack on heart of Kabul

The force of the first explosion -- at about 6:30 a.m. (9 p.m. Thursday ET) -- shook parts of the Afghan capital as windows shattered and smoke billowed. The sound of gunfire filled the air.

The attack started with a suicide car bomb and four suicide bombers with explosive-laden vests, said Taliban spokesman Zaidullah Mujahid. Three of the bombers were killed, he said.

Afghan police blocked off roads leading to the area of the blasts.