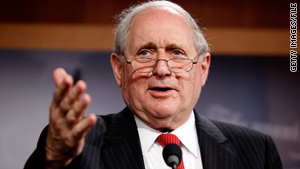 Washington (CNN) -- The chairman of the Senate Armed Services Committee plans to unleash a withering attack Wednesday on private contractors working for the company formerly known as Blackwater in Afghanistan, accusing them of flouting regulations and endangering the U.S. mission.

Key to beating the Taliban in Afghanistan will be the ability of U.S. forces to win support from the Afghan people, many of whom do not distinguish between U.S. contractors and the U.S. military, Sen. Carl Levin will say, according to an advance text of his remarks.

"If we are going to win that struggle, we need to know that our contractor personnel are adequately screened, supervised and held accountable -- because in the end, the Afghan people will hold us responsible for their actions," the Michigan Democrat will say.

"If we don't fix the problems of oversight and make sure contractors like Blackwater play by the rules and live up to their commitments -- we'll be doing a disservice to our troops by making their already difficult and dangerous job even more so."

Though more than 100,000 contractors operate for a variety of contractors in Afghanistan, Levin singled out Paravant, a company that had "no meaningful distinction" from the company formerly known as Blackwater, which is currently known as Xe Services, he said in the advance text.

Combined Security Transition Command - Afghanistan, a multinational military formation that trains the Afghan National Army, did not appear to have investigated the incident, he said.

He also cited a widely reported May 5, 2009, incident in which two Paravant personnel fired their weapons, killing two Afghan civilians and wounding a third. The two men have been charged with murder in the shootings.

An Army investigation appeared to find that the contract personnel had "violated alcohol consumption policies, were not authorized to possess weapons, violated use-of-force rules and violated movement-control policies," said Levin, who cited as his source the man who then led the Combined Security Transition Command -Afghanistan.

Paravant's contract required it to "ensure that its personnel ... behave at all times in accordance with the highest professional and ethical standards," Levin said.

Records for the two men responsible for the May 5 shooting show the company failed to properly vet them, Levin said.

In a written statement, a spokesman for Xe Services said the company is looking forward to testifying Wednesday.

"Xe's new management was taking steps to address shortcomings in the Paravant program when the tragic May 5 incident occurred," said Mark Corallo of Corallo Comstock Communications. "One of those shortcomings discovered was that the former management of Paravant had provided weapons to personnel for personal protection without first obtaining the proper authorization from DoD.

"Though Raytheon, the prime contractor, and the DoD customer were both aware of Paravant management's decision, and were working to obtain authorization, contractors should not have been armed without the proper approvals. That said, the individual independent contractors' actions the night of May 5 clearly violated clear company policies and they are being held accountable."

After the May 2009 shooting, Raytheon -- which had subcontracted the work to Paravant -- accused the company of having failed to properly oversee its personnel.

In addition, Paravant called its personnel "independent contractors," despite "compelling evidence" that they were company employees, Levin said. That meant that the company withheld no income taxes and paid no Social Security, Medicare or unemployment tax for them, he said.

Before last May's shooting, the Army said it had no contracting officer representative in the area, telling the committee that it relied on a Dutch contractor to oversee the project.

The Army said it also monitored the contractors from an office in Florida by calling the chief of training and education for the Afghan National Security Forces at Combined Security Transition Command - Afghanistan.

On December 3, 2008, before the first shooting incident, Raytheon told the Army by e-mail that Paravant workers had weapons without authority, Levin said, but the Army "apparently failed to take action."

Levin concluded the advance text by saying that the contractors need to understand that they have an impact on how the U.S. military is perceived.

"Even one irresponsible act by contractor personnel can hurt the mission and put our troops in harm's way," he said. "If we don't fix the problems of oversight and make sure contractors like Blackwater play by the rules and live up to their commitments -- we'll be doing a disservice to our troops by making their already difficult and dangerous job even more so."