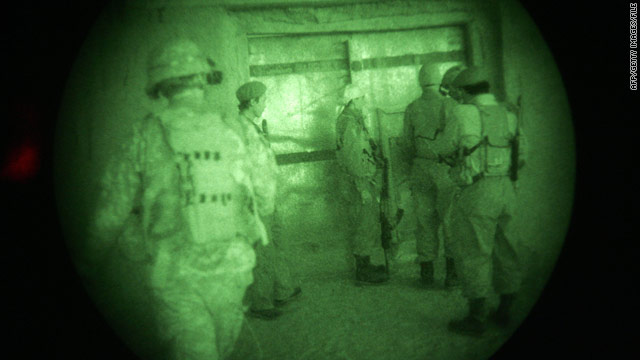 Washington (CNN) -- A new classified directive to coalition forces in Afghanistan puts restrictions on nighttime raids of Afghan homes and compounds, according to a senior U.S. official who has seen the document.

The official declined to be identified because a declassified version of the document has not been made public. The directive is signed by Gen. Stanley McChrystal, the top NATO commander in Afghanistan, the official said.

The directive comes as the coalition seeks to reduce tension between its military forces and Afghan civilians in an effort to maintain Afghan public support.

Nighttime raids in which troops enter private homes have sparked problems for U.S. and NATO forces. The raids are viewed as overly invasive -- a violation of the privacy of the home in Afghan culture -- and they can turn violent.

The document orders forces to use Afghan troops at night "whenever possible" to knock on doors of residences and compounds, and to use them if forcible action is required for entry, the official said.

But the directive also orders troops to "conduct an analysis" of whether it is militarily essential to conduct a raid at night or whether it can be put off until daylight, the official said. If troops can keep a target under surveillance but wait for daylight, they then can enlist the aid of village elders, perhaps, in determining if a home or compound poses a threat, the official said.

The official emphasized that troops always have the right to defend themselves and are given leeway to use their best judgment on the battlefield.

The updated version, which is yet to be published, will include "more clarity" for troops on how to operate in "escalation of force" incidents, such as when a vehicle approaches a checkpoint in a potentially threatening manner and troops must decide whether, and when, to fire at it. The official declined to offer further details but said the aim is to make sure even the most junior troops have full understanding of rules and procedures.

Some troops and local commanders have expressed concerns that recent rules can inhibit their ability to take action under fire.

These directives come as the coalition has been involved in several recent incidents in which civilians were inadvertently killed, and as the coalition conducts major operations in southern Afghanistan.

McChrystal released a video message to the Afghan populace apologizing for an incident this week in which 27 Afghan civilians were killed.

"I have made it clear to our forces that we are here to protect the Afghan people. I pledge to strengthen our efforts to regain your trust to build a brighter future for all Afghans," he said in the message.

The official said the documents may be made public in the coming weeks, after current operations ease.