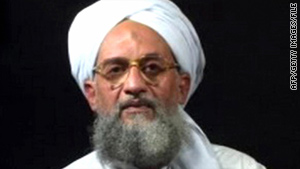 Kabul, Afghanistan (CNN) -- A man claiming to be Ayman al-Zawahiri, al Qaeda's No. 2 man, blasts the Turkish government for its role in Afghanistan in a newly released video.

CNN cannot authenticate the message, but CNN analysts who listened to the recording say the voice is consistent with al-Zawahiri's intonation and accent.

In what would be al-Zawahiri's first audio message released to the world in 2010, the speaker accuses mostly Muslim Turkey of committing crimes against Islam and its adherents. Turkey is one of several countries that have committed troops to the coalition forces in Afghanistan.

The speaker did not appear in person in the video; a picture of him was shown instead as part of a larger production focusing on al Qaeda in Afghanistan. The video was released by As-Sahab Media, al Qaeda's production company.

"Let every free Turkish Muslim who is keen on protecting Islam and his fellow Muslims know that the Turkish forces will serve the Crusader campaign in Afghanistan, which is burning the villages, destroying the houses and killing the women and the children, occupying the lands of the Muslims, fighting the Sharia and spreading lewdness, debauchery and corruption," the speaker says.

"The Turkish troops will carry out the same operations in Afghanistan that the Jews are carrying out in Palestine, so how would the pious, free Turkish Muslim people accept such a crime against Islam and the Muslims?" the speaker asks.

Turkey has 1,755 troops with NATO's International Security Assistance Force in Afghanistan. According to the Turkish General Staff, Turkey led the force from February 2004 to August 2005.

Turkey also led Regional Command Capital in Kabul from April 2006 to December 2007. The command capital oversees security and reconstruction; it does not participate in counterterrorism or drug trafficking operations, the Turkish General Staff says on its Web site.

Amid the harsh rhetoric toward Turkey, the speaker does not refer to any specific Turkish military operations in Afghanistan.

"They are posted on radical Islamist Web sites for the purpose of recruitment and incitement," she said.

After the message purported to be from al-Zawahiri, the video goes on to feature a Turkish man, identified as Muaath al-Turki, who is described as a soon-to-be martyr.

Al-Turki praises the September 11 attacks, asks his family for forgiveness and tells them not to grieve over him. Asked whether he is happy or sad about his coming mission, he says he is sad only that he "can die only once for the sake of jihad."

According to the narration on the video, al-Turki attacked the U.S. base in Khost, Afghanistan, the same base that was the site of a December 30 suicide attack in which seven CIA operatives and a Jordanian army captain were killed.

The narrator describes the locale as "the old Khost airport that the U.S. forces and the CIA use as their operations headquarters and a den for their intelligence service."

The video shows, from a distance, an explosion and billowing smoke, and the narrator says al-Turki's attack killed eight U.S. soldiers and 12 Afghans.

The U.S. military says there is no truth to that claim.

The one other suicide attack on the Khost base was in January 2008, Sgt. Susan Wilt at the Bagram base in Afghanistan said. The assailant prematurely detonated the bomb, and no U.S. soldiers died, she said. Three Afghans, however, were killed, she said.

CNN's Saad Abedine and Khadijah Rentas contributed to this report.