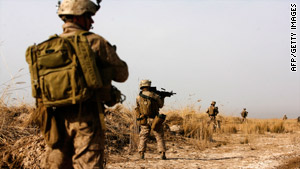 When U.S. patrols leave villages for the night, the Taliban come out to intimidate.
STORY HIGHLIGHTS

Washington (CNN) -- The news that two Taliban "shadow governors" have been detained in Pakistan underscores the reality that in Afghanistan there are, in effect, two governments.

There is the formal government of federal and local officials, backed by the United States and elected by the Afghan people. The other is run by the Taliban and governs by fear and intimidation of the population, but also at times provides services the legitimate government does not.

The Taliban version operates out of the public view and very much in the background of everyday life, hence the term "shadow government" -- even though the commander of coalition forces in southern Afghanistan says regional shadow governors are known, "broadly speaking."

While shadow governments in post-9/11 Afghanistan are nothing new, they have slowly been built up over the years since the Taliban government was decimated in the 2001 U.S. invasion. As the United States turned its energies to the war in Iraq, the Taliban quietly took advantage and rebuilt.

Believed to be in hiding in Pakistan, leader Mullah Mohammed Omar has built the Taliban in Afghanistan back up using intimidation tactics on the local population, but is doing it behind the scenes where it is harder for the United States to identify.

During the day, when U.S. troops patrol villages and towns, Taliban members melt into the population. At night, when patrols generally move back to their bases, the Taliban reign of terror comes out, threatening or executing members of households seen to be collaborating with the United States or the allied government, threatening women who do not adhere to their strict religious laws and destroying schools and other infrastructure projects built by the United States.

In the report, McChrystal wrote that the Taliban government network operates under the name of the Islamic Emirate of Afghanistan and is organized much like a legitimate government. It appoints governors, gives them performance reviews and replaces them if necessary.

There are avenues where citizens can can file complaints against their own officials, as well as act on those complaints.

The Taliban are known for their strict Sharia law, and the shadow government has set up courts under that law to deliver "swift and enforced" justice both in areas controlled by the Taliban and in areas controlled by the Afghan government, according to McChrystal. Taliban fighters and laborers are taxed and, McChrystal wrote, the Taliban claim to provide security against the Afghan government and coalition forces as well as those seen as common criminals.

McChrystal said the Taliban essentially provide major elements of governance. Through that, the Taliban have been able to get control of the population and manipulate them out of sight of the U.S. military.

I saw this myself in 2006 in the eastern province of Paktika, a long-time hot spot of al Qaeda and Taliban influence.

While patrolling with U.S. troops and a provincial reconstruction team in a small village, we had to stop an on-camera interview with a local boy after our translator said the gathering crowd was beginning to show signs that Taliban were approaching.

It was toward the end of the day and the usual military patrols had left. Our arrival was an unannounced visit. We had been warned that Taliban were probably already moving into the town at that hour.

Our military escorts suggested we stop the interview so the Taliban would not threaten any of the people who were seen talking to the military or to me.

When we left, the translator, all too familiar with Taliban tactics, was shaken and grew very visibly concerned for the well-being of the boy.

We never got word back about his fate.

The United States is in a concerted effort to dismantle these localized governorships in an attempt to take back control of a country that, in many places, is being ruled by the Taliban in a strong and violent manner. That style of governing keeps local populations in fear, and allows the Taliban to set up a network of municipalities as they spread their power across the country.

U.S. officials have confirmed to CNN that in the past several weeks, a number of these Taliban shadow governors have been arrested by Pakistani or Afghan authorities. The significance of these arrests is highlighted by the recent arrest of the Taliban's No. 2 man, Mullah Abdul Ghani Baradar.

Baradar's primary function was as the Taliban's military commander, organizing plans and sending orders to shadow governors, who act essentially as local military commanders in the Afghanistan provinces. Officials have said his arrest has yielded information that has led directly to the arrest of some of these governors.

"Our hope is clearly that this is creating a certain amount of discontent, worry, turmoil within the organization, that Taliban fighters are going to think twice about remaining loyal to this cause, and that this will ultimately adversely impact the momentum that they have enjoyed over the past several months," Pentagon spokesman Geoff Morrell said at a briefing on Thursday.

But the United States seems to have a long way to go either fighting low-level Taliban or persuading them to be a part of a new Afghanistan.

A report by the military coalition in Afghanistan late last year said that almost all of the Afghan provinces, 33 of 34, have shadow governments with active Taliban shadow governors. Less than five years ago there were only 11 provinces with shadow governments, according to the report.

The Taliban have been able to build up so much that the network of shadow governments essentially became a new version of the command structure the Taliban had before the 2001 U.S. invasion, according to the report.

Afghanistan expert and CNN contributor Peter Bergan said this new structure consists of the "inner shura" (inner council), an 18-member group headed by Taliban leader Mullah Omar that arrives at decisions based on consensus, but "within Omar's guidance."

Those decisions are then communicated to regional shuras of up to 20 members, then to provincial shuras and the Taliban's "shadow (provincial) governors."

Despite the moniker given to them, regional shadow governors are generally well known to the coalition military and are not thought to be highly effective, according to the commander of coalition forces in southern Afghanistan.

"They have shadow governance in every district in the south. And we, broadly speaking, can identify who they are," said British Army Maj. Gen. Nick Carter.

"Now, extent to which that shadow governance is successful is patchy to say the least," he said.

But there are many cases around the country where the Taliban, while governing with an iron fist, are preferred over President Hamid Karzai's government because the Taliban deliver needed services and security. Residents reject the Karzai government, which is seen as corrupt and illegitimate.

The process starts with combat operations quickly followed by civilian and Afghan government teams talking to and working with the local population to ensure them of support from the Karzai government.

The hope is that the local population will empower themselves and move away from Taliban influence and trust the Afghan and Afghan-backed local government.

If it works, the United States has a potential new strategy to win back Afghanistan. If it doesn't, it will have to re-evaluate its mission there.