Another Taliban leader captured in Pakistan 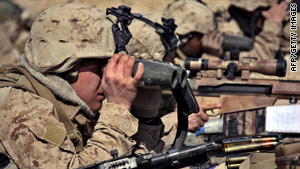 NATO troops keep vigil as they set up a base on the north of Marjah in Afghanistan's Helmand province.
STORY HIGHLIGHTS

"The Taliban is down another shadow governor," the American source said late Wednesday, declining to be named because of the sensitivity of the information.

The news came against the background of an intensified U.S.-led campaign against insurgents on both sides of the border.

Taliban fighters are resisting an allied military push into area they control in Helmand province in the south of Afghanistan, a military operation called Moshtarak.

According to British Maj. Gen. Nick Carter, it will the NATO-led force "another 25 to 30 days to secure that which needs to be secured" in the region, and a further three months after that to be sure insurgents are being kept out.

But Operation Moshtarak has reached "the end of the beginning," he said in a briefing from Afghanistan broadcast by the Pentagon Channel. "The insurgent was entirely dislocated within 24 hours" of the insertion of troops by helicopter, he said.

The Nad-e Ali district is "broadly secure," he said, but there is still Taliban resistance in Marjah. "It will be some days before we can be completely confident that Marjah is secure," said Carter, the International Security Assistance Force's head of Regional Command South.

Ten civilians were killed on the second day of the operation, he said. Reports at the time said 12 were killed.

"Operation Moshtarak has reached the end of the beginning.
--Maj. Gen. Nick Carter

"They (Taliban) know this is their last stronghold. They're not backing down," CNN's Atia Abawi reported from the battlefield, where she is embedded with U.S. Marines.

The crackle of small arms fire and the whoosh of outgoing mortar rounds from the Marines were clearly audible on the line as she described the battle.

"About five minutes ago Taliban started attacking our area," she said shortly before 8 a.m. ET. "The Taliban are not giving up -- they seem to be coming out in squads, (but) they know they can't group together in large numbers" because it would make them easier targets.

The Taliban seem to include "foreign fighters who will fight to the death," she said.

Across the border in Pakistan, four people were killed and five were wounded Thursday when a drone fired on a suspected militant compound in Pakistan's tribal region, intelligence sources and a local political official told CNN.

The four who were killed were suspected militants, two intelligence officials told CNN. It was not clear whether the wounded were also militants.

The remote-controlled aircraft fired two missiles at the compound, which is in the Danday Darpakhel area of North Waziristan, one of seven districts in the tribal region along the Afghan border, the sources said. They asked not to be identified because they are not authorized to speak to the media.

The U.S. military does not comment on reported attacks by the pilotless aircraft, but the United States is the only country operating in the region known to have the ability to launch missiles from drones.

Mullah Salam, the Taliban commander, was arrested in Pakistan, the Afghan government and Taliban sources agree, but they named different cities as the location of his capture. Gov. Muhammad Omar of Afghanistan's Kunduz province said Thursday he was detained in Quetta -- where the Afghan Taliban reportedly has its leadership councils. The Taliban sources said he was nabbed in Faisalabad.

Salam is believed to be the Taliban commander for Kunduz province, Omar said.

He was directing Taliban military operations in the province, including ordering terrorist actions, mine planting and suicide attacks, said Abdul Razaq Yaqubi, the chief of police in Kunduz.

Yaqubi said Salam and another Taliban "shadow governor," Mullah Salih, were arrested in the Pakistani city of Peshawar last week. He said the information came from Pakistani authorities.

Salih was the shadow governor of Baghlan province, the police chief said. There was no immediate confirmation of Salih's arrest.

Taliban sources and Omar said several other suspected members of the Afghan Taliban were arrested with Salam, but their identities are not clear.