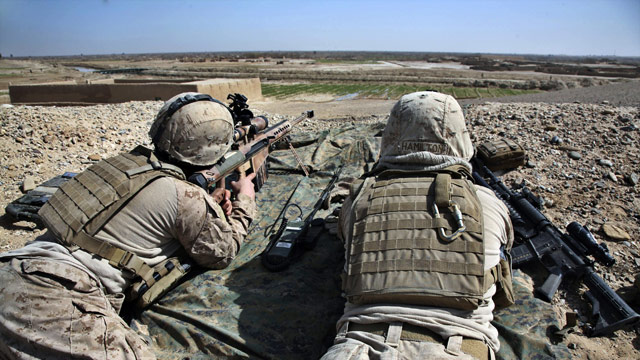 U.S. Marines stand guard as U.S. and Afghan forces set up a base in Helmand province on Thursday.
STORY HIGHLIGHTS

Thursday night, a CNN exclusive "AC360" investigation: How a policy on detaining prisoners in Afghanistan could be putting U.S. troops at risk. Watch "AC360," Thursday night at 10 ET.

(CNN) -- It will take NATO-led military forces "another 25 to 30 days to secure that which needs to be secured" in Afghanistan's Helmand province, and a further three months after that to be sure insurgents are being kept out of the area, British Maj. Gen. Nick Carter said Thursday.

But Operation Moshtarak has reached "the end of the beginning," he said in a briefing from Afghanistan broadcast by the Pentagon Channel. "The insurgent was entirely dislocated within 24 hours" of the insertion of troops by helicopter, he said.

The Nad Ali district is "broadly secure," he said, but there is still Taliban resistance in Marjah.

"It will be some days before we can be completely confident that Marjah is secure," he said.

Video: 'Taliban not giving up'

Ten civilians were killed on the second day of the operation, he said. Reports at the time said 12 were killed.