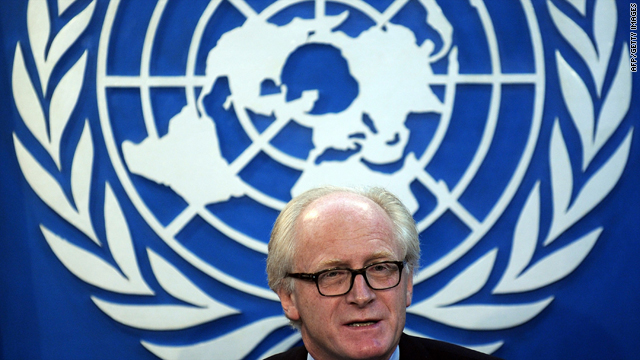 (CNN) -- The Taliban should halt attacks on schools and clinics to demonstrate support for the reconciliation effort in Afghanistan, the United Nations' top envoy in Kabul said Wednesday.

"I believe that the reconciliation process, a peace process, is important, and there is a need to talk," Kai Eide, the U.N. special representative to Afghanistan, said. "The best way of doing it is, as we have seen in so many other conflicts, by starting step-by-step with some confidence-building measures."

Eide, who is about to retire as the U.N.'s envoy in Kabul after a two-year tenure, told CNN's Christiane Amanpour in an exclusive interview to air Thursday that he does not believe the conflict will ultimately be solved by military means alone. "There has to be a political process," he said.

The U.N. envoy pointed out that the Afghan government and its international allies have already implemented some confidence-building measures of their own in an effort to win the trust of the Taliban.

"One of them is, for instance, the start of the de-listing of (Taliban) people from the sanctions list. That has already happened. Five people were de-listed," he said, referring to an international list of names of people allegedly with close links to al Qaeda.

Eide suggested it might be worth de-listing more Taliban members as well, so they can travel freely and have access to their assets without fear of any international sanctions.

He also raised the possibility of freeing some detainees from the Bagram detention center in Afghanistan, which holds 645 suspected terrorists. "I think this should be reviewed to see if anybody could be brought out of detention," Edie said.

Edie declined to comment on whether or not he has had any contact himself with the Taliban, and he said it's too early to assess the impact of the arrest of the insurgency's top military commander, Mullah Abdul Ghani Baradar, in Karachi, in a joint Pakistani and U.S. operation.

Eide's remarks come as U.S., British, and Afghan forces continue a major offensive in and around the Taliban stronghold of Marjah in southern Helmand Province. It's NATO's largest assault since the U.S.-led invasion of Afghanistan in 2001.

"I think it is important, with all the troops that are now coming in, to try to push back the insurgency in those areas where we've seen a stronghold," Eide said. "Now comes the next phase, which is to establish the institutions that are required and also to start thinking of the economic development of those areas."

Afghans are better prepared for this "second phase" than at any other time during the war, he said. "They are bringing in people who can start running the institutions, the judiciary, and so on... and then to also start economic development."

The Afghan National Army is making significant progress in taking the lead in security operations in Afghanistan, but added it needs the support of thousands more NATO trainers, Eide said.

"What we need to do now in order to reach the goal that we set for October 2011, which is 172,000 (Afghan) troops, is to intensify the training activities from our side," he said. "I believe that the troop contributing countries should look at the composition of their forces and devote more of them to training and mentoring of the Afghan forces."

NATO needs a big number of training teams and perhaps as many as 1,000 international personnel in institutions in Kabul and elsewhere in Afghanistan as part of the surge of more than 30,000 U.S. and NATO troops that is now underway, Eide said.

"I think the Afghan president and the Afghan government want to be enabled to play the lead role, both on the military side and on the civilian side," he added.

The U.N. envoy said he believes the reconciliation effort has not yet reached a point where a real peace process is underway.

He said it's important for President Hamid Karzai of Afghanistan to form a national consensus when he holds a peace jirga, or conference, this spring and to make sure that all of Afghan civil society unites behind reconciliation.

"We need to improve the institutions of this country and to bring the people closer to the government," Eide noted. "We need a nationwide plan, which we do not have so far."

Asked what he was most proud of during his U.N. tenure in Afghanistan, Eide stated first that he believes that he and the U.N. played a decisive role in putting concerns about civilian casualties at the top of the agenda.

"We've seen how the current commander, Gen. (Stanley) McChrystal has moved very, very vigorously on this and reduced the number of civilian casualties and house searches dramatically."

Eide also said Afghanistan's international partners are more united than ever on key political issues, and brushed aside criticism from his former deputy, American Peter Galbraith, about the management of last August's presidential election amid charges of fraud by Karzai's supporters.

Eide will be replaced by a veteran Swedish diplomat, Staffan de Mistura, at the beginning of next month.