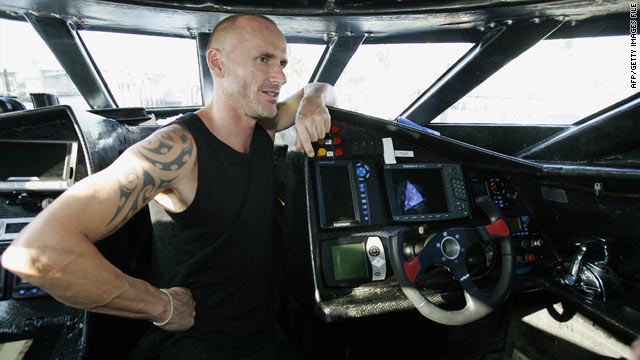 File photo of Pete Bethune taken in 2006. He was captain of the "Ady Gill" boat, which sank after a Japanese whaler rammed into it in January, said the Sea Shepherd Conservation Society.
STORY HIGHLIGHTS
RELATED TOPICS

Tokyo, Japan (CNN) -- An anti-whaling activist jumped aboard a Japanese security ship on Monday in a bid to make a citizen's arrest of its skipper over the sinking of their boat, an animal rights group said.

Pete Bethune was captain of the "Ady Gill" boat, which sank after a Japanese whaler rammed into it in January, the Sea Shepherd Conservation Society, which owned the boat, said on its Web site.

The New Zealander climbed aboard the Japanese ship "Shonan Maru 2" in the middle of the night from a jet ski to arrest its skipper, the animal rights group said.

"His first attempt failed when he fell into the frigid waters," the group said. "But despite this, the crew of the 'Shonan Maru 2' failed to see him and he successfully boarded the whaler without detection."

After the incident, Bethune complained of a minor injury to his thumb, according to Japan's ministry of fisheries.

The 20 crew members of the Japanese ship were not harmed and their vessel was not damaged, the ministry said.

Japanese authorities called the incident the latest "publicity stunt" from the animal rights group and said they have not decided what to do with the activist.

Two years ago, Sea Shepherd activists boarded another Japanese ship and handcuffed themselves to the vessel with plastic ties, according to the Institute of Cetacean Research, a branch of Japan's fisheries ministry that deals with whaling.

At the time, an Australian vessel helped return the two activists back to the Sea Shepherd, ICR said.

Sea Shepherd has accused the Japanese ship "Shonan Maru 2" of destroying their vessel during the skirmish in the Southern Ocean -- a term used to describe parts of the Indian, Pacific and Atlantic oceans that surround Antarctica.

However, Japanese authorities deny their ship intentionally hit the catamaran and have said the activists were harassing their whaling fleet.