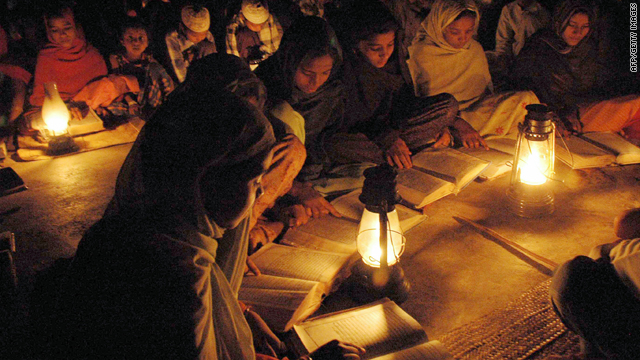 According to an independent power expert, over 40 per cent of India's population still depends on kerosene for lighting, such as these children using lanterns on the grounds of their school.
STORY HIGHLIGHTS

New Delhi, India (CNN) -- For a village in India's faraway northeast, it is time for an unusual jubilee: Posts to convey electrical power arrived in Kanugaon in 1985. In 2010, residents still find themselves without electricity -- leading them to mark the 25th anniversary of what they refer to as a life in darkness.

"All our petitions with the authorities have gone in vain," said Tankeswar Das, a member of the group, "Committee to mark the silver jubilee of electricity poles."

He said hundreds of villagers on Sunday used a unique method in a new bid to make their voice heard -- a mock "yajna," or a Hindu fire ritual.

"Maybe a yajna to atone for any sin that might be depriving us of this essential service works since all other efforts have not," worked out, Das said.

Located in Assam state, Kanugaon has been on India's subsidized power-supply plan that the country has launched to cover more than 100,000 darkened villages by March 2012.

According to the nation's 2001 census, about 78 million rural households had no access to electricity.

Officials accept that Kanugaon, along with many other villages, has largely remained left out in the first stage of the federal program -- named after slain former prime minister Rajiv Gandhi -- because of limited sanctions for infrastructure and equipment.

Most of us still live without power ... live in the dark.
--Tankeswar Das, a member of the "Committee to mark the silver jubilee of electricity poles"
RELATED TOPICS

"Hopefully, we will get the government sanction for the requirements to cater to the demands in the second stage later this year," said Lalit Sarma, senior project manager in Golaghat district, where Kanugaon is located.

An Indian village is declared electrified if it meets three criteria: Having basic infrastructure, such as distribution transformers and lines in inhabited localities as well as in the hamlets where low-castes live; having power supply in public institutions, such as schools, village council offices, health and community centers; and having electric connections in at least 10 percent of the total number of households.

In the project records, Kanugaon is therefore considered electrified though there is a "no" placed against key columns like completion of all works, certification by the village council and energizing.

"Most of us still live without power ... live in the dark. This electrification is only on paper," said Das.

According to Das, residents have to travel to a neighboring tea estate to charge their cell phones at a cost of US$0.01.

India relies heavily on thermal power. According to the federal power ministry, more than half of power generation comes from coal, while nuclear energy accounts for less than three percent.

Authorities acknowledge inadequacies in power generation, transmission and distribution -- besides wastage and theft -- are major hurdles to feeding energy to the country's billion-plus population.

"Very high levels of technical and commercial losses and lack of commercial approach in management of utilities has led to unsustainable financial operations," the national electricity policy states.

Analysts hail India's power programs as ideal, but rate their monitoring as poor and their costs as too high.

According to independent power expert Girish Sant, more than 40 percent of India's population depends on kerosene for lighting.

"And the cost of electricity is too high when compared with the purchasing abilities of our vast population. Besides, the poor people often encounter a number of procedural complications in getting and maintaining connections," he said.

Sant, who leads the non-profit group Prayas, which advocates public interest in the nation's energy sector, said the country needed a stronger vigilance mechanism for the execution of its projects.

"Targets cannot be achieved unless it is ensured that the last home in a village is hooked to a line that is very well energized. Grievance-redress systems have to be so simplified so that an ordinary villager becomes aware of them and is able to use them without fear and with ease. Otherwise, tall electric posts with dead cables are a mockery of the entire electrification scheme," Sant said.