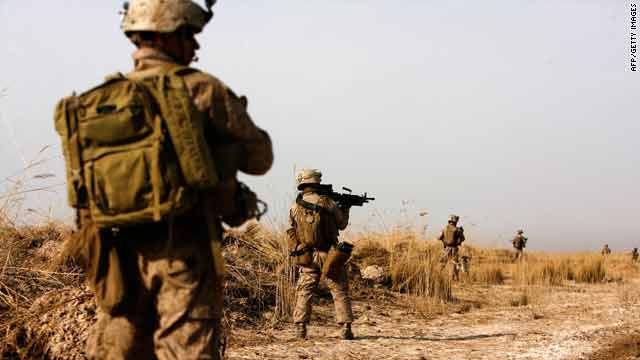 "We deeply regret this tragic loss of life," U.S. Gen. Stanley McChrystal, commander of the International Security Assistance Force, said in a statement. "The current operation in Central Helmand is aimed at restoring security and stability to this vital area of Afghanistan. It's regrettable that in the course of our joint efforts, innocent lives were lost."

Coalition forces fired two rockets with the High Mobility Artillery Rocket System at insurgents firing upon Afghan and ISAF forces, but they struck about 300 meters off their intended target, ISAF said.

The incident happened in the Nad Ali district of Helmand province, where NATO forces have launched Operation Moshtarak, a huge offensive by an international coalition of 15,000 troops including Afghans, Americans, Britons, Canadians, Danes and Estonians.

Coalition forces have also suspended use of the HIMARS pending a review of Sunday's incident. The intended target was an insurgent compound from where coalition forces were taking direct fire, ISAF said.

NATO, which launched the effort Saturday, announced the offensive before it started so that citizens could get out of harm's way. Karzai on Saturday had urged Afghan and international troops to exercise "absolute caution" and ensure civilian safety.

Helmand is a bastion of pro-Taliban sentiment and awash with the opium used to fund the insurgency. Marjah, a region known as the heroin capital of Afghanistan, is where the Taliban has set up a shadow government.

The Moshtarak operation also includes securing Kandahar and providing support to the government and police there, British Maj. Gen. Gordon Messenger said in a news release Sunday. The Taliban has had increasing influence in Kandahar.

Officials said Sunday they did not know how many Taliban fighters remained in the Marjah region of Helmand province, but think they may be in the hundreds -- some of whom are holed up in civilian compounds.

Taliban forces tried to overrun, successfully in some cases, several positions that coalition forces had secured inside the city, U.S. Marines told CNN.

In one instance, three suspected suicide bombers breached a secure military area near Koru Chareh Bazaar, throwing three or four grenades inside the compound, Marine officials said. The insurgents were killed before they could detonate their bomb vests.

The sporadic firefight continued throughout the day, with an average of two to three Taliban fighters being killed in each battle, the Marines said.

"It is not unusual for the Taliban to melt away to regroup. The threat is still present in the area that they might come back, and our troops are well aware of that," Messenger told CNN.

"The troops are fighting in very open terrain, especially now during the winter," he said. "This is a very complex operation but it has worked extremely well."

Messenger emphasized the cooperation with the Afghan nationals as a key element in both preparing and executing this operation.

"The atmosphere among the locals remains positive, largely because elders on the ground knew about the operation ahead of time," he said. "The sense is genuinely that the population is prepared to give this a go."

Provincial spokesman Dawoud Ahmadi said 27 Taliban fighters have been killed. Afghan and international force also discovered a total of 2,500 kilograms (5,500 pounds) of explosives during the operation.

In the past, the Taliban has often inflated casualty figures.

"NATO forces have not captured any areas in Marjah from the Mujahadeen," said Qari Yousif Ahmadi, the Taliban spokesman.

Overall, Messenger said, Taliban resistance had not prevented coalition efforts to hold meetings, known as shuras, with local leaders. The coalition has been participating in these meetings to get Afghans on its side.

"There had been, and remained, very little Taliban interference. There had been small arms attacks from a distance which had tested the patrols, but nothing had stopped the mission from progressing or shuras from taking place," Messenger said.

Officials said they hope Afghan forces and the government will maintain control, win allegiance from the citizens and provide farmers with an alternative to the poppy crops that pervade the region.

"Everyone understands that what has happened over the last 24-48 hours is the easy bit," Messenger said in a news release. "The hard bit, the challenge, is the enduring effort, is delivering the security which allows the Afghans to start providing for their people."