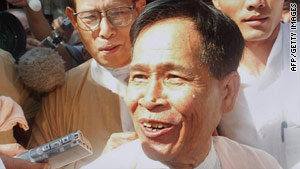 YANGON, Myanmar (CNN) -- A senior leader of the party of Myanmar pro-democracy leader Aung San Suu Kyi was released Saturday night at the end of his six-year house arrest.

Tin Oo, vice chairman of Suu Kyi's NLD party, was freed after a government officer entered the home and read a release order.

The 83-year-old told reporters waiting outside his home that he would return to work as early as Monday.

The ruling military junta has kept her under house arrest for about 14 of the past 20 years. The junta has ruled Myanmar, also known as Burma, since 1962.

Suu Kyi was sentenced to 18 additional months of house arrest in May after American John Yettaw sneaked uninvited into her house, prompting her to be tried on charges of government subversion.

The 64-year-old had told a Myanmar court that she didn't know Yettaw, was unaware of his plans to visit and didn't report his intrusion because she didn't want him to get into trouble. She was sentenced to additional home confinement after being found guilty of violating the terms of her house arrest.

Suu Kyi has appealed her sentence to Myanmar's Supreme Court.