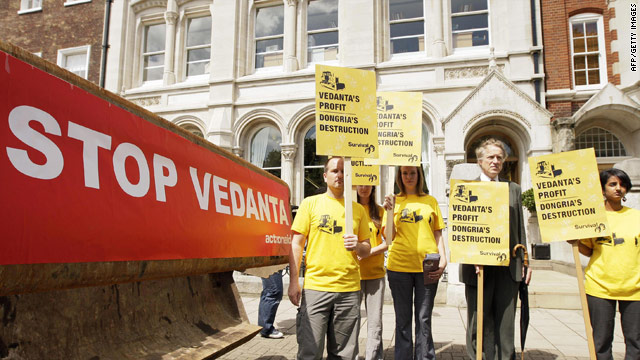 Protesters gather for a demonstration against Vedanta, during the company's AGM in London, on July, 27, 2009.
STORY HIGHLIGHTS

New Delhi, India (CNN) -- Campaigners fighting for the rights of indigenous peoples have appealed to the makers of the movie "Avatar" to help an Indian tribe protect its home from a real-life threat.

London-based Survival International has drawn a parallel between the Na'vi of "Avatar" and the Dongria Kondh tribe in the eastern Indian state of Orissa, who it says are struggling to defend their sacred mountain from being mined by British firm, Vedanta Resources.

The global human rights watchdog, Amnesty International, has also lashed out at Vedanta over its plans at Orissa's Niyamgiri Hills.

"The proposed mine threatens the very existence of the Dongria Kondh, an 8,000-strong indigenous community that has lived on the Niyamgiri hills for centuries," Amnesty noted in its report.

In its condemnation of the firm's controversial project, Survival International placed an advertisement in the Hollywood magazine Variety, urging "Avatar" director James Cameron to help the Dongria Kondhs.

"Like the Na'vi of 'Avatar', the Dongria Kondh(s) are also at risk, as their lands are set to be mined by Vedanta Resources who will stop at nothing to achieve their aims," said Survival director Stephen Corry in a statement. "The mine will destroy the forests on which the Dongria Kondh(s) depend and wreck the lives of thousands of other Kondh tribal people living in the area."

"'Avatar' is fantasy... and real," read the Survival advertisement.

"Like the Na'vi of 'Avatar,' the Dongria Kondh(s) are also at risk.
--Survival International
RELATED TOPICS

The group has not said if there has been any response from the movie's producers.

Amnesty International also accused Vedanta of threatening the health of local communities in Orissa with what it said was air and water pollution from its aluminum refinery in the same region.

"People are living in the shadow of a massive refinery, breathing polluted air and afraid to drink from and bathe in a river that is one of the main sources of water in the region," said Ramesh Gopalakrishnan, Amnesty International's researcher on South Asia. "It is shocking how those who are most affected by the project have been provided with the least information."

But Vedanta has defended its venture in Orissa's Lanjigarh area, accusing Amnesty of challenging the Indian government's credibility.

In a statement the company insisted the report of the rights group was based on outdated documents, which it said had already undergone scrutiny by Indian regulators and the Indian judiciary.

"The report strikes at the heart of (a) project directly related to India's economic growth and rural upliftment," the company said. "The Lanjigarh project, whose many facets have been developed by Vedanta with the highest regard for human rights, will deliver significant economic stimulus to the local community, especially historically underdeveloped areas of Orissa."

Vedanta cited remarks it said were made by a local mines minister in November that no tribal family faced displacement because of mining.

According to its Web site, "sustainable development is a key part of Vedanta's strategy and overall ethos. It represents a core commitment of our management and employees."

The company said its rehabilitation program has centered around its Orissa refinery, where it says it has resettled 115 families in a rehab colony while five other families have chosen self-relocation.

On Friday, the Church of England dropped its multi-million dollar stake in Vedanta, citing concerns for local communities.

The move, it said, came after having examined allegations about the conglomerate's aluminum refinery and the planned bauxite mine in Niyamgiri for about seven months, since June 2009.

Vedanta said it was disappointed in the church's decision.

"We work with a number of NGOs and with the authorities in India, the world's largest democracy, ensuring all our projects are conducted in compliance with the law and international best practice," the company said.

"If Vedanta mines the mountain, the water will dry up. In the Niyamgiri forests, there are tigers, bears, monkeys and wild boar. All kinds of other animals. We all live together. Where will the animals go to drink? Where will we go to drink?" asked a young man in a video posted on Survival International's Web site.