By Shane Smith, Founder of VICE and VBS.TV 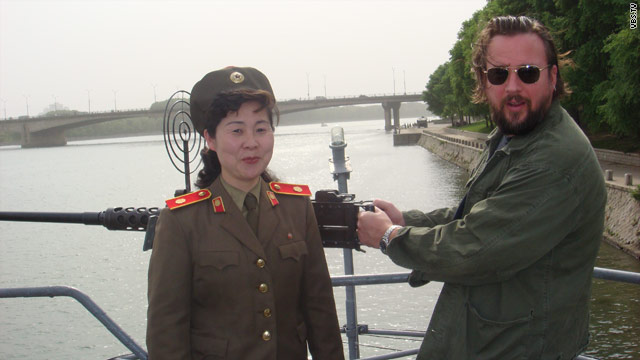 Brooklyn, New York (VBS.TV) -- Getting into North Korea was one of the weirdest processes VBS has ever dealt with. After we went back and forth with their representatives for months, they finally said they were going to allow 16 journalists to come and cover the Arirang Mass Games in Pyongyang. Just before our departure, they suddenly said, "No, nobody can come." Then they said, "OK, OK, you can come. But only as tourists." But they already knew we were journalists, and over there if you get caught being a journalist when you're supposed to be a tourist you go to jail. We don't like jail. And we're willing to bet we'd hate jail in North Korea.

But we went for it. The first leg of the trip was a flight into northern China. At the airport, the North Korean consulate took our passports and all our money, then brought us to a restaurant along with our tour group. All the other diners left, and these women came out and started singing North Korean nationalist songs. We were thinking, "Look, we were just on a plane for 20 hours. Can't we just go to bed?" But this guy with our group who was from the L.A. Times told us, "Everyone in here besides us is secret police. If you don't act excited then you're not going to get your visa." So we got drunk and sang songs with the girls. The next day we got our visas. A lot of people we had gone with didn't get theirs.

We flew into North Korea that night. We were supposed to have three days before the games started, but as soon as we got on the ground they told us, "The games are happening now." We went straight to the stadium, and there were 40,000 people in the stands, portraying the history of the North Korean revolution with flip cards. On the playing field before them, about 60,000 people did wild synchronized-gymnastics routines. The 15 of us who made up the audience watched from a marble dais. We were the only spectators. Fifteen audience members for a 100,000-man extravaganza.

See the rest of the Vice Guide to North Korea

The next day, our grand tour began. We went to the International Friendship Museum, which comprises 2,000 rooms carved into the bottom of a mountain. The displays are all gifts from different world leaders. Joseph Stalin gave Kim Il-sung a train. Mao Zedong also gave Kim Il-sung a train. He got hunting rifles from communist East Germany's Erich Honecker and Romania's Nicolae Ceausescu and all the other Eastern-bloc guys. Madeleine Albright famously gave Kim Jong-il a basketball signed by Michael Jordan.

Perhaps the weirdest thing about North Koreans is that they genuinely don't seem to know that the rest of the planet hates and fears them. They believe (or maybe they really convincingly lie about believing) that the whole world admires and envies them and that they're the true light of socialism and Juche, which is their leader's philosophy of Communist self-reliance.

As the days went on, North Korea presented us with progressively stranger sights and encounters. Being there was like being nowhere else on the planet. Are we glad that we got into Pyongyang and were able to document it? Yes. But are we even gladder that we made it out? Watch our documentary on the trip and try to guess the answer.