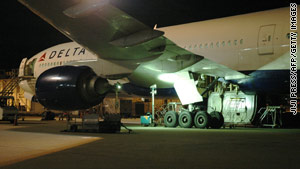 A mechanic found the body of a man in the landing gear bay of this Boeing 777 that landed in Tokyo, Japan, on Sunday.
STORY HIGHLIGHTS
RELATED TOPICS

Tokyo, Japan (CNN) -- A body was found in the landing gear bay of an airplane that arrived at Tokyo's Narita Airport Sunday, the airport announced.

The dead man was not carrying a passport or personal belongings, airport police said.

The man was of dark complexion and dressed in blue jeans and a red and dark blue long-sleeved shirt, police told CNN.

Police said he possibly froze to death and suffered a shortage of oxygen at high altitude, but did not provide a definite cause of death pending an autopsy.

A mechanic found the body in the landing gear bay, which was impossible to enter from the cabin, the airport said.

CNN's Junko Ogura and Ayesha Durgahee contributed to this report.