No deal in release of American from North Korea, State Department says 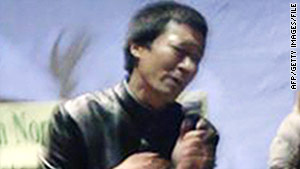 Washington (CNN) -- The United States made no deal with North Korea for the release of American Robert Park, a State Department spokesman said Friday.

The 28-year-old missionary was arrested December 25 after he crossed into the North from China. Park was carrying a letter to North Korean leader Kim Jong Il, calling on him to free political prisoners and resign.

North Korean authorities informed the United States and the Swedish Embassy in Pyongyang that they planned to release Park, State Department spokesman P.J. Crowley said. Sweden represents U.S. interests in North Korea because Washington and Pyongyang have no diplomatic relations. Direct notification by the North to the United States is rare.

Park was expected to travel from Pyongyang to Beijing, where he would be met by U.S. consular officials. He then would fly to the United States, Crowley said.

"There was no deal involved here," Crowley said.

"We think these cases should be dealt with on a humanitarian basis. We welcome the decision to release him and look forward to his safe return to the United States. We are grateful that this has been resolved expeditiously."

In reporting the release, the Korea Central News Agency said, "The relevant organ of the [Democratic People's Republic of Korea] decided to leniently forgive and release him, taking his admission and sincere repentance of his wrongdoings into consideration."

Pax Koreana, a South Korea-based human rights group with which Park is affiliated, celebrated the announcement of his release.

"Today, we announce God's victory and His awesome work to the world," the group said in a statement. "We declare that we will march for the freedom of [North Korea] in God unceasingly."

Pyong Park, Robert's father, said in San Diego, California, that he was "so excited" about the news, "but we're not quite sure it's real." He had no other information about his son's release.

The younger Park reportedly told relatives before Christmas that he was trying to sneak into the isolated communist state to bring a message of "Christ's love and forgiveness" to the leader of North Korea.

KCNA earlier carried a lengthy account of what were said to be Park's misunderstandings about the North and how they had been proved wrong since he had crossed the border.

During an interview with North Korean authorities, he reportedly told investigators that "he was taken in by the false rumor spread by the West and committed a criminal act in the end."

Park said he had heard stories of concentration camps and mass killings, prompting his mission, the news agency said.

A South Korean Web site in December posted a copy of the letter it said Park was trying to deliver to Kim, urging the North Korean leader to free political prisoners and "open your borders so that we may bring food, provisions, medicine, necessities and assistance to those who are struggling to survive."

But according to the North Korean news agency, once in North Korea, Park said he was treated well and allowed to attend church and pray freely.

A second American was detained January 25 for trespassing into North Korea from China, the news agency reported last week. That person has not been identified, and the State Department said Friday that it has no information on that individual.