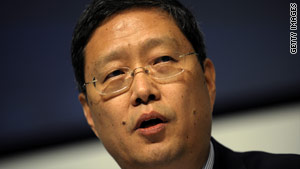 Beijing, China (CNN) -- China has threatened to slap sanctions on American companies that sell arms to its rival Taiwan as part of a range of punitive actions Beijing is taking to protest the deal.

China's Defense Ministry said the decision was made "in consideration of the serious harm and impacts on Sino-U.S. military relations" brought about by the arms deal, according to Xinhua.

China had already complained to the United States about the deal, announced Friday by the Obama administration.

The deal with Taiwan -- which neither China nor the United States recognizes as an independent country -- does not include F-16 fighter jets, which China has vehemently opposed.

"This is a clear demonstration of the commitment this administration has to provide Taiwan with defensive weapons it needs and as provided for in the Taiwan Relations Act," State Department spokesman P.J. Crowley said Friday.

He said the action is consistent with Washington's "one-China" policy and will help maintain security and stability across the Taiwan Strait.

The arms deal is the latest chapter in a decades-long uneasy standoff. China claims Taiwan is its own territory and has threatened to invade if Taiwan ever declares independence. The United States has said it will defend Taiwan if China ever attacks.

CNN's Eve Bower and Charley Keyes contributed to this report.