The gun markets of Pakistan 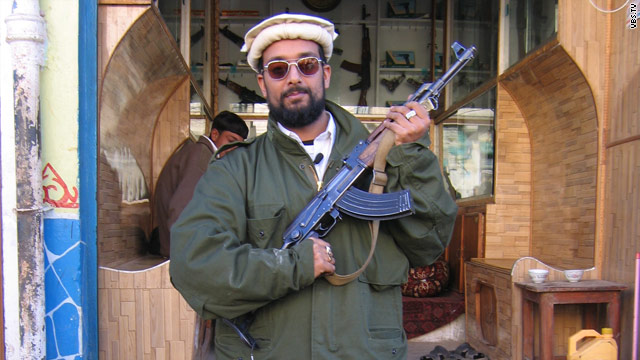 Editor's Note: The staff at CNN.com has recently been intrigued by the journalism of VICE, an independent media company and Web site based in Brooklyn, New York. VBS.TV is Vice's broadband television network. The reports, which are produced solely by VICE, reflect a very transparent approach to journalism, where viewers are taken along on every step of the reporting process. We believe this unique reporting approach is worthy of sharing with our CNN.com readers. Viewer discretion advised.

Brooklyn, New York (VBS.TV) -- On January 22, 2006, the New York Times reported that all foreign journalists were being banned from Pakistan's tribal areas, which has been called "the most dangerous place in the world." A week before that, the CIA fired missiles remotely from a Predator aircraft into the Waziristan tribal area. They were hoping to eradicate a bunch of al Qaeda operatives. Instead, they killed 18 women and children.

One week before that, I arrived in Pakistan to visit Darra Adamkhel, the massive open-air market located deep in the tribal areas, where a frighteningly high percentage of Islamic holy warriors goes to buy their guns.

Gaining access to the tribal areas was next to impossible. It took months of pre-planning with the consul general of Pakistan in Montreal and top officials in Peshawar. They repeatedly denied us entry because, according to them, the Pakistani Army had too many "sensitive operations" going on in that region. Without my personal advantage (a family friendship with the governor of the Northwest Frontier Province), we never would have gotten in.

The government assigned me and my team a political agent named Naeem Afridi. He was born and raised in the tribal areas. He took care of us while we were there, and he was a godsend. You can't do anything in this part of the world without someone like Naeem.

Our driver stopped at a security point just outside the town center, where we were introduced to the Frontier Agency militia, six angry-dad-looking guys with AKs and sidearms. They became our personal bodyguards, and followed us through the tight warren of gun shops and factories, barren little brick rooms where upward of 1,000 guns are manufactured every day. Most of the work is done by hand.

The vendors are Pashtuns, who are basically the toughest people in the world. They comprised the majority of the mujahideen who kicked the Soviets out of Afghanistan in the late '80s.

These days, the town is rumored to be completely overrun by the Taliban. They purchase the guns, then cross the border to fight the U.S. army in Afghanistan, or they drive through the mountains to the south to fight the Pakistani army.

This summer, I went back to Pakistan, and found that the fuse on this powder keg has become even shorter. The Pakistani army has surged more troops into the tribal areas, attempting to eradicate the Taliban and al Qaeda. The U.S. and British troops are attempting to do the same thing on the other side of the border in Afghanistan. Meanwhile, Pakistan itself has seen violence spread to its major urban centers, where extremists have been detonating bombs and taking over police stations.

But at the same time, there is a cultural explosion taking place, a vibrant art scene and metal and rock bands popping up everywhere. The whole situation has become ultra charged by the fact that there are tons of news channels operating uncensored by the insanely corrupt government.

For Pakistan, it's a volatile, turbulent, and fascinating moment in time.