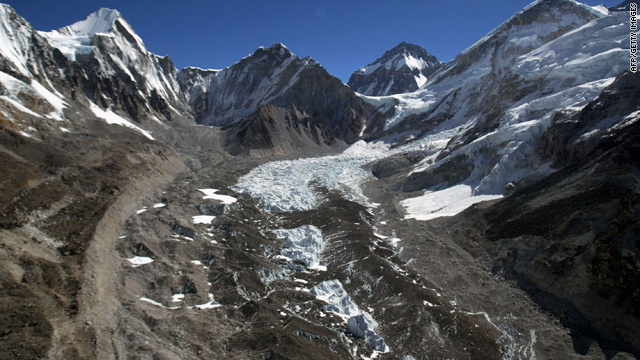 The 2007 IPCC report erroneously stated that the Himalayan glaciers would vanish by 2035.
STORY HIGHLIGHTS
RELATED TOPICS

(CNN) -- The U.N.'s leading panel on climate change has apologized for misleading data published in a 2007 report that warned Himalayan glaciers could melt by 2035.

In a statement released Wednesday, the Intergovernmental Panel on Climate Change (IPCC) said estimates relating to the rate of recession of the Himalayan glaciers in its Fourth Assessment Report were "poorly substantiated" adding that "well-established standards of evidence were not applied properly."

Despite the admission, the IPCC reiterated its concern about the dangers melting glaciers present in a region that is home to more than one-sixth of the world's population.

"The chair, vice-chairs, and co-chairs of the IPCC," the statement continued, "regrets the poor application of IPCC procedures..."

The apology follows a growing storm of controversy which initially forced the IPCC to concede that data relating to the Himalayan glacier melt included in the 2007 report was not backed up by sufficient scientific data.

Speaking at the World Future Energy Summit in Abu Dhabi Wednesday, the IPCC chairman, Rajendra Pachauri admitted errors had been made but said it was not an excuse to question the legitimacy of all global warming science.

"Theoretically, let's say we slipped up on one number, I don't think it takes anything away from the overwhelming scientific evidence of what's happening with the climate of this earth," he said, according to Agence France-Presse.

The controversy centers on a paragraph in Chapter 10 of the 2007 report which states: "Glaciers in the Himalaya are receding faster than in any other part of the world, and if the present rate continues, the likelihood of them disappearing by the year 2035 and perhaps sooner is very high if the Earth keeps warming at the current rate. Its total area will likely shrink from the present 500,000 to 100,000 square kilometers by the year 2035. "

But is has recently emerged that the IPCC statement on Himalayan glaciers, which was based on information from a 2005 report by the World Wildlife Fund, was in turn gleaned from an article that appeared in the popular UK science journal, The New Scientist in June 1999.

In the article, "Flooded Out," Indian glaciologist Syed Hasnain speculates that the Himalayan glaciers could vanish within 40 years as a result of global warming.

A glacier expert interviewed by CNN explained that the data published was flawed.

Michael Zemp from the World Glacier Monitoring Service said: "There are simply no observations available to make these sorts of statements."

Zemp says that the figures quoted in the report are not possible because 500,000 square kilometers is estimated to be the total surface area of all mountain glaciers worldwide.

"The other thing is that the report says the glaciers are receding faster than anywhere else in the world. We simply do not have the glacier change measurements. The Himalayas are among those regions with the fewest available data," Zemp said.

In defense of the IPCC, Zemp says "you can take any report and find a mistake in it but it's up to the next IPCC report to correct it."

"Glaciers are the best proof that climate change is happening. This is happening on a global scale. They can translate very small changes in the climate into a visible signal," he said.