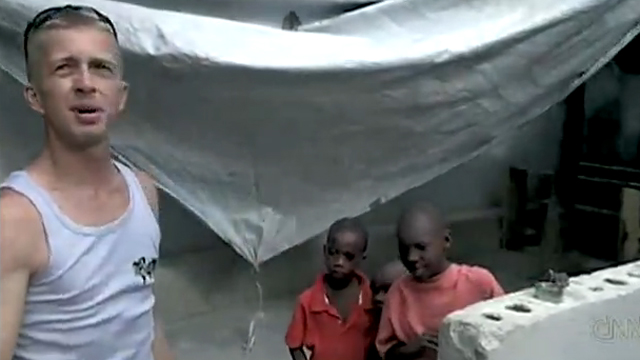 (CNN) -- An American relief worker jailed in Haiti under suspicion of kidnapping a 15-month-old boy has been released, the man told CNN Wednesday.

"As soon as they said I was being released I was at first shocked and couldn't believe it because it was already dark and normally nothing happens after sun goes down around there," Paul Waggoner, who had been held since mid-December in Port-au-Prince, said in an interview.

Waggoner was being transported Wednesday to a safe location to receive medical attention, according to a statement from Materials Management Relief Corps, a group that he co-founded.

"Waggoner spent 18 harrowing days incarcerated in Haiti, accused of kidnapping a child despite undeniable evidence that the child in question had died at Haitian Community Hospital last February," the group said in a statement.

"No charges were brought against Waggoner... even though he was held in the notoriously dangerous penitentiary for two weeks," the statement said. Waggoner had been held in the National Penitentiary in Port-au-Prince.

Interviewed by phone from an undisclosed location on Wednesday, Waggoner said a judge had found "contradictions" in statements from the boy's father.

Waggoner said the boy's parents had been trying to extort him and that "it was a matter of a father and a mother trying to make a dime off of their kid."

A Haitian judge had concluded that sufficient evidence existed to hold Waggoner while investigators evaluated the father's complaint that the American kidnapped his critically-ill son from a hospital, according to Jon Piechowski, a spokesman for the U.S. Embassy in Haiti.

The Materials Management Relief Corps is a humanitarian organization that seeks to provide logistical support to medical workers in Haiti, where a major earthquake caused extensive damage in January. According to the group's website, Waggoner lives in Nantucket, Massachusetts.

Accounts differ as to what happened next, but the father believes the child survived and that Waggoner kidnapped him, according to Piechowski.

Waggoner's supporters, including two physicians, have said the child died, and that his body was cremated because the father would not claim the remains.

Quinlan said earlier that he believed Haitian authorities were trying to extort money from Waggoner.

A friend of Waggoner's recently expressed concern that the relief worker would face danger upon being released.

"I think the biggest concern I've got for his safety once he's out of prison," said Paul Sebring, a fellow aid worker, "is that, you know, people surrounding this case may not be happy with the ruling that's happened and may come after him in some sense."

But Waggoner said Wednesday that he hopes to do more aid work in Haiti.

"I wouldn't say that anybody needs to have second thoughts about coming down here," he said. "If any aid workers want to do work in Haiti they should absolutely do it. The people here absolutely need it."

The United States was keeping close watch on the case, the State Department has said, but it was unclear whether officials were working for Waggoner's release.

"We have monitored his court appearances and continue to track the case closely," said P.J. Crowley, a spokesman for the State Department, said earlier this week.