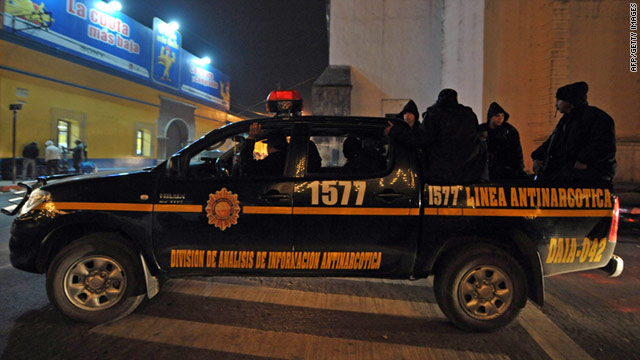 (CNN) -- Guatemala's government has declared a state of siege and sent hundreds of troops to a northern province where officials say a Mexican drug gang is overtaking towns and threatening residents.

President Alvaro Colom announced the 30-day emergency rule in Alta Verapaz on Sunday. The rule allows the military to order anyone suspected of conspiring against the government to be arrested and imprisoned without a warrant, the state-run AGN news agency said.

Government data shows cells of the drug gang known as Los Zetas are in the area to protect drug trafficking paths between Honduras and Mexico, "intimidating the population with their heavy weapons and threatening farmers to give up their land for criminal activities," AGN reported.

The state of siege also allows the government to place greater restrictions on public gatherings, travel visas and gun licenses, among other things, according to AGN.

"The population should be calm. What we are doing is not intended to persecute honest, working people," Interior Minister Carlos Menocal told reporters.

In an interview with CNN en Espanol last month, Menocal said his country needed more help from the United States to combat cartels, which were increasingly carving out new drug transport paths.

"In the end, the large majority of drugs travel through Central America, and the assignment of resources or the financial support of the United States government is not the same as Colombia and Mexico receive," he said.

Corruption and violence are high in Guatemala, according to the United Nations, which created a committee in 2006 to investigate those issues there.

Carlos Castresana, the former head of the International Commission Against Impunity in Guatemala, announced his resignation earlier this year because he felt the country had not made enough reforms to its justice system.

More than 200,000 people have been killed in the nation since 1970, mostly as a result of organized crime, drug-trade violence and a 36-year civil war that ended in 1996.