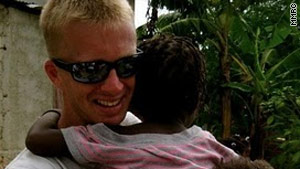 (CNN) -- The U.S. is keeping close watch on the case of an American relief worker jailed in Haiti under suspicion of kidnapping a 15-month-old boy, the State Department said Friday, but it remains unclear whether the U.S. is working for Paul Waggoner's release.

"We have monitored his court appearances and continue to track the case closely," said P.J. Crowley, spokesman for the State Department.

A Haitian judge concluded after a hearing Wednesday that sufficient evidence exists to hold Waggoner while investigators evaluate a man's complaint that the American kidnapped his critically ill son from a hospital, according to Jon Piechowski, a spokesman for the U.S. Embassy in Haiti.

Waggoner is the co-founder of Materials Management Relief Corps, a humanitarian organization that seeks to provide logistical support to medical workers in Haiti, where a major earthquake caused extensive damage in January.

Accounts differ as to what happened next, but the father believes the child survived and that Waggoner kidnapped him, Piechowski said.

Waggoner's supporters, including two physicians, have said the child died, and his body was cremated because the father would not claim the remains.

Quinlan said he believes Haitian authorities are trying to extort money from Waggoner, who is being held in the National Penitentiary in Port-au-Prince.

Waggoner's sister said she is concerned for his well-being.

"The cells are made for about 10 people, and an average of 70 per cell is the current population," Randi Waggoner Lightner said. "There is nowhere for them to sleep; they don't get baths; water is unsafe if existent."

The State Department has maintained contact with Waggoner's family, Crowley said, and has "kept his family fully informed."

In February, 10 U.S. missionaries were charged with kidnapping over accusations that they tried to take 33 children out of the country without their parents' approval.

Ultimately, all were released and have since returned to the United States.