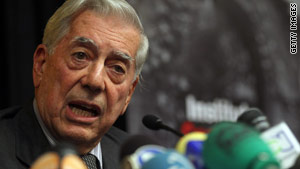 (CNN) -- Peruvian novelist Mario Vargas Llosa is injecting his cachet as a newly minted Nobel Prize winner into the political sphere, in a strong criticism of the political aspirations of the daughter of a disgraced former president.

Keiko Fujimori, a congresswoman and daughter of ex-president Alberto Fujimori, is one of the leading candidates in next year's presidential election, according to polls.

"If the daughter of the dictator who is condemned to prison for being a criminal and a thief has the possibility of becoming the president of Peru, I will be one of the Peruvians who will go out to try to impede it through all the legal channels available," Vargas Llosa said Monday.

"I think that would be a real catastrophe for our country," he added.

Vargas Llosa, who lost to Alberto Fujimori in a runoff in his previous presidential campaign, received the Nobel Prize for Literature last week at a ceremony in Norway.

According to various polls published in Peru, Keiko Fujimori is currently the leading or second-place contender in the race.

Her father was president of Peru from 1990 to 2000, a period that was highlighted by the defeat of terrorists who disrupted society, but stained by an authoritarian streak and human rights abuses.

Alberto Fujimori fled Peru in the midst of a scandal involving his spy chief, and was extradited years later back to his country to face trial. He was convicted in four separate trials for a litany of corruption and human rights abuse charges. Among the sentences he received was a 25-year prison term for authorizing the operation of a death squad responsible for killing civilians.

Representatives for Keiko Fujimori said she would respond to Vargas Llosa's comments Tuesday.