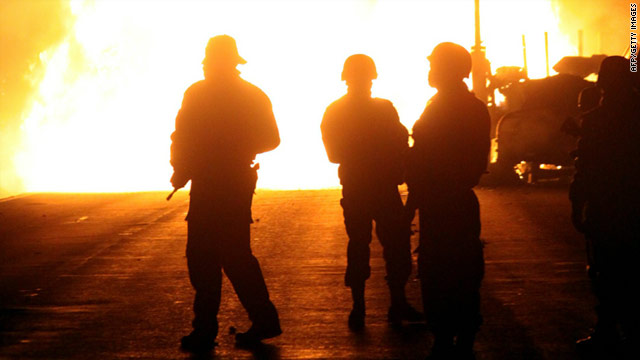 Police officers guard a road blockade in Morelia during a shootout between police and drug cartel members.
STORY HIGHLIGHTS

(CNN) -- A top drug lord has been gunned down in Mexico after two days of shootouts between armed forces and members of a criminal organization, a national security spokesman said Friday.

Nazario Moreno Gonzalez, also known as "El Chayo" or "El Doctor" was killed as part of an operation in the Mexican southwestern state of Michoacan, according to spokesman Alejandro Poire.

Poire also said that members of the federal police, army, air force and navy participated in the joint operation centered in the city of Apatzingan and the surrounding mountainous region.

Moreno was one of the main leaders and founders of the drug cartel known as "La Familia Michoacana," according to Poire.

"This drug cartel began operations under the name of 'La Empresa' (The Enterprise) around the year 2000 and has terrorized the population in Michoacan ever since, not only trafficking and producing drugs, but also extorting, kidnapping, and murdering people," he said.

The national security spokesman said that five federal police officers and three civilians have died during the joint operation, still under way as of Friday afternoon. He also said that three members of La Familia were killed and three others have been captured.

"During the retreat and escape of these criminals, they have been picking up those members of the criminal group who have been wounded and presumably died," said Poire, who said it is too soon to provide an accurate number of deaths and arrests.

"It's time to intensify the pressure on this organization in order to diminish crime in the (Michoacan) region in an efficient and permanent way," said Poire. He said the Mexican government is sending more armed forces to the conflict zone.

La Familia's stronghold is in the state of Michoacan -- also the home state of Mexican President Felipe Calderon, who sent thousands of federal troops there after declaring a crackdown on cartels at the beginning of his presidency.

Gunfire from high-powered weapons greeted police when the operation began Wednesday, Poire said. From there, the violence escalated.

Two minors were killed during the operation, when gunmen shot at civilian cars and later used the vehicles as barricades, Poire said Thursday. Nearby, suspected members of the cartel set trucks and buses ablaze on highways to block approaching federal police.