Protest of Haiti election results: 'We will set the country on fire' 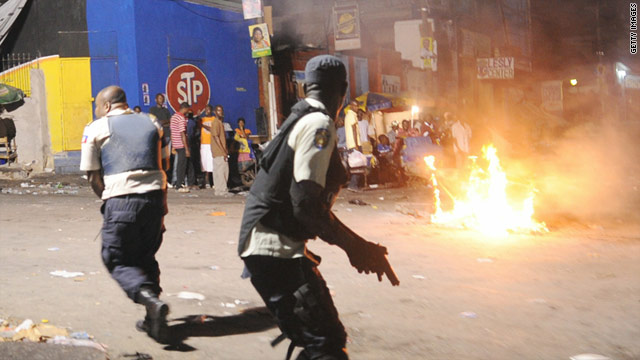 Protests break out in Port-au-Prince as the initial results of a disputed election were announced.
STORY HIGHLIGHTS

Port-au-Prince, Haiti (CNN) -- Protests erupted around the Haitian capital Tuesday night after an election council announced a runoff between a former first lady and a candidate allied with an increasingly unpopular government.

Mirlande Manigat, a former first lady of Haiti, won the presidential election held over a week ago with 31.37 of the vote, the Provisional Electoral Council announced late Tuesday.

Jude Celestin, the candidate backed by President Rene Preval, came in second with 22.48 percent while popular musician Michel Martelly was just behind Celestin with 21.84 percent.

Fires erupted throughout the city late into the night, and protesters promised more violence.

"Preval is a thief. We don't need Jude Celestin. We need Michel Martelly," people chanted in the streets early Wednesday morning. "Tomorrow we will set the country on fire."

Since no candidate obtained the 50 percent of the votes needed to win outright, Haitians will return to the polls in January, four days after the first anniversary of the devastating earthquake, to vote in a runoff election.

But the vote was fraught with allegations of fraud, with many believing that Preval would go to any lengths to ensure a win for his protege, Celestin.

The U.S. Embassy in Haiti issued a statement Tuesday saying that the United States stands ready to support efforts to review irregularities in the vote so that results are "consistent with the will of the Haitian people expressed in their votes."

"Like others, the government of the United States is concerned by the Provisional Electoral Council's announcement of preliminary results from the November 28 national elections that are inconsistent with the published results of the National Election Observation Council (CNO), which had more than 5,500 observers and observed the vote count in 1,600 voting centers nationwide," the embassy said.

Celestin's entry into the runoff prompted violent demonstrations throughout Port-au-Prince. Gunfire rang out on the streets, and the smell of fires and burning tires filled the air.

People ran out on the streets denouncing Celestin. In the central Champs de Mars plaza, white pickup trucks carried police in the back and made their way around barricaded streets.

Residents of a tent city that covers the entire plaza beat on the rows of portable toilets, knocking one down.

It had been feared that a win or runoff spot for Celestin would trigger more unrest in the Haitian capital. Preval's government has become increasingly unpopular with Haitians who see a lack of progress in their homeland.

Preval was barred by the constitution from seeking another term. Celestin headed the state-run transportation company that gained notoriety in the days after the quake as its trucks picked up the bodies of the dead.

The next president of Haiti will inherit the daunting task of leading this Caribbean nation in its struggle to recover from years of dictatorship and poverty compounded earlier this year by the earthquake and a current cholera epidemic that has now sickened almost 100,000 people.

His campaign manager, Damian Merlo, said Martelly had expected that Preval would not relinquish power easily.

The OAS-CARICOM Joint Election Observation Mission, which includes the Organization of American States and the Caribbean Community, said it maintained a presence in the vote tabulation center. Last week, United Nations Secretary-General Ban Ki-moon said the suspected fraud in the electoral process was more serious than previously thought.

It took eight days to announce the final results of the November 28 election.

Since then, riots have erupted in the Haitian capital, some violent enough for police to spray tear gas.