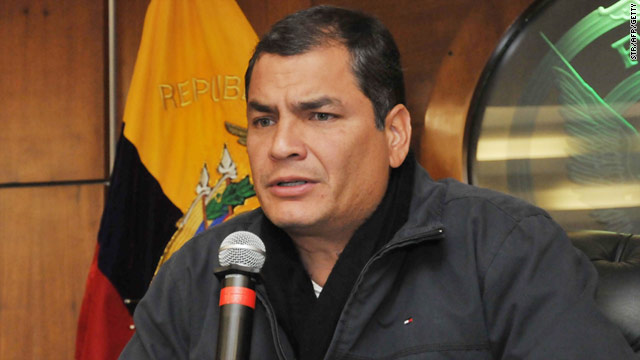 President Rafael Correa said the declaration made by the deputy foreign minister was "spontaneous" and personal in nature.
STORY HIGHLIGHTS
RELATED TOPICS

(CNN) -- Ecuadorian President Rafael Correa said Tuesday night that his country has not invited WikiLeaks founder Julian Assange for a visit, as was widely reported.

A statement from Ecuador's foreign ministry this week appeared to offer the controversial Assange an invitation to discuss a trove of leaked documents. The ministry also offered to process a request for residency, if Assange chose.

But a statement from the Ecuadorian Embassy in the United States said that was not the case.

"While there was some confusion in the media flowing out of Quito yesterday, Ecuador's President Rafael Correa has clarified that his country has not invited WikiLeaks' founder Julian Assange to Ecuador," the statement said.

In Ecuador, Correa said that his country has not made a formal invitation to Assange and that the ministry declaration, made by Deputy Foreign Minister Kintto Lucas, was "spontaneous" and personal in nature.

Assange faces charges of rape and molestation in Sweden, allegations that came out after WikiLeaks released more than 75,000 pages of documents relating to the U.S.-led war in Afghanistan in July. It wasn't clear whether the application's rejection was related to the charges; Assange claims that the charges are part of a smear campaign.

In October, the site released more than 400,000 pages of secret documents relating to the Iraq war.

The latest release, which WikiLeaks says will eventually reach 250,000 pages, contains mostly State Department cables sent by American diplomats between the end of 1966 and February 2010. The release prompted widespread condemnation from U.S. officials and a range of reaction from condemnation to ambivalence from international governments.