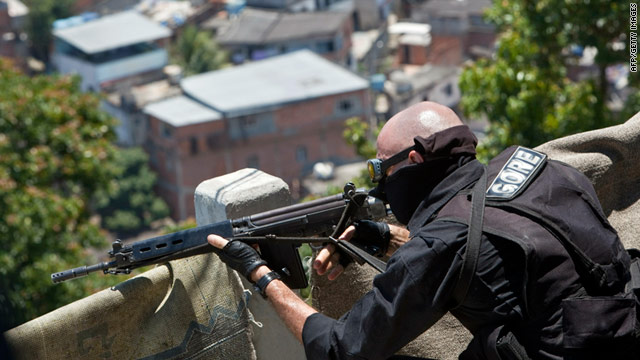 (CNN) -- The military operation to clear a Rio de Janeiro slum of drug traffickers will effectively turn into an occupation of the area at least through October of next year, Gov. Sergio Cabral said in a radio interview Tuesday.

Rio state Gov. Sergio Cabral said that at least 2,000 troops will remain at the Alemao slum -- called a favela in Portuguese -- to keep up the effort to pacify the area. He announced the move after meeting with Dilma Rousseff, Brazil's president-elect, in the capital, Brasilia. Originally, he had requested the troops for only six months.

Rousseff offered her support for the security work being carried out in Rio, Cabral said. The troops are needed so that the government doesn't have to delay future operations in other communities overrun by drug traffickers, he said.

The troops will remain until a police unit and station are installed in Alemao, slated for the middle of next year.

Brazil, which will host the World Cup in 2014 and the Olympics in 2016, is under increasing pressure to crack down on violent crime and clean up its slums.

Over the weekend, armored vehicles followed by police trucks rolled into the favela to restore order.

The police to be placed are known as Pacifying Police Units, a special force designed to live and work in the favelas they protect. Such units are already in operations in some favelas, but this most recent operation is the most ambitious to date.

Authorities have been trying to dislodge traffickers from their hiding places for two years, but the operation in Alemao is the first time the government has tried to regain territory run by the criminals in earnest, said Paulo Sotero, director of the Brazil Institute at the Woodrow Wilson International Institute for Scholars.

At the outset, the events appear to be a victory for the government, but winning over the locals, who were living under the rule and services of the traffickers, will be a challenge.

"This is just the beginning. [Police] will have to work with people to convince them that you will not abuse their rights," Sotero said. That is the goal of the Pacifying Police.

Reaction inside and outside Brazil to the success of the current operation has been positive, with speculation that the country is trying to clean up its streets before the World Cup and Olympics come to town.

Sotero, however, suggests that it is domestic pressure that is leading to police work.

As a whole, Brazil's economy is growing, and so is the middle class. As people find themselves in better situations, they also begin to demand better quality of life, Sotero said. People want things like better education and security.

"This, I think, is what created the pressure to try to find new solutions for a very old problem," he said.

The slums became dangerous places during a period when the city and state of Rio had poor government, something that was exploited during the drug boom in the 1980s, Sotero said.

Conversely, one of the factors behind the efficient action today is the fact that the local and state leaders are from the same political party and are allies with the federal government, said Thomas Trebat, executive director of the Institute of Latin American Studies at Columbia University.

While Brazil as a whole is doing well, economic and social indicators in the city of Rio have lagged, Trebat said. This is significant because Rio is often seen as a representation of Brazil as a whole.

The perception is that "if this iconic city is undergoing social chaos, how can it be that Brazil is a BRIC?" Trebat said, referring to the designation given to rapidly rising countries of Brazil, Russia, India and China.

The World Cup and Olympics may be an impetus for acting now, but the pressure comes from Rio's need to reflect the better side of Brazil, he said.

Whatever the reason for the incursion and occupation of Alemao, residents there are optimistic about the future.

Dilsa Maria, a maid, said, "We lived a very repressed life. Now we have more freedom. We can come and go. This is important not just for me but for everyone here."