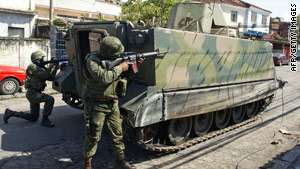 (CNN) -- Temporary calm returned to Rio de Janeiro on Saturday as anxious residents remained locked in their homes, awaiting developments in the week-long conflict that has turned their picturesque city into a de facto war zone.

Dozens of armored military vehicles combed the streets of Rio on Saturday, video from CNN's Brazilian affiliate TV Record showed, as authorities prepare for another incursion into some of the city's notoriously dangerous shanty towns, including the Alemao favela complex -- a virtually impenetrable labyrinth of slums in the city's north.

Police spokesman Mario Sergio Duarte declared an ultimatum Saturday against drug gangs in the complex, stating that a military attack is imminent.

"We will not retreat in our decision to bring peace to Rio," Duarte said. "We are in our final stages of reaching the traffickers in the Alemao complex."

"Whoever wants to turn himself in, do it now," he said.

At least 35 people have died, 174 arrested and 123 detained since violence broke out Sunday as a response by drug gangs to an increased police presence in the crime-ridden slums, known as favelas, police said, according to the official Agencia Brasil. More than 96 vehicles have been burned.

Gangs continued to torch buses and exchange fire with police Friday throughout the city's northern neighborhoods as more than 800 federal troops arrived to support Rio's civil authorities who are often outnumbered and outgunned by the powerful criminal groups.

Freedom of movement also has been curtailed in the conflict zones as police put up blockades in an effort to prevent fugitive criminal gang members from finding protection in neighboring slums.

Residents trapped in the crossfire and unable to go to their jobs have waved white flags outside their homes asking drug gangs to spare them, as criminals spray police with semi-automatic weapon fire and military artillery.

On Friday, police detained the wife of Marcinho V.P, a renowned drug lord who allegedly ordered the coordinated attacks from a prison in the state of Parana.

According to local reports, the conflict began November 21 when disgruntled drug traffickers decided to launch an attack against Rio residents to protest the government's crackdown on their organizations.

TV Record showed two letters allegedly written by drug lords from maximum-security prisons, protesting the government's crackdown on drug trafficking and vowing to avenge the arrest of their members.

Ocimar Santos, president of Rocinha.org, the website for Rio's largest favela, said that for people who live in Rio's slums, this is business as usual.

"They are listening to the rumors and laying low," Santos said.

If the conflict spills over to Rocinha, residents there are ready for violence, he said. But for the first time, Santos said, they will side with the police.

"We now perceive that our population feels more protected and respected by the police with the creation of these ... peace units," he said.

Another development in the conflict is the direct involvement of the federal government.

Brazil's Defense Minister Nelson Jobim said that in addition to the 800 federal troops, other reinforcements in support of local police are being directed to Rio amid fears that the crisis could spill over to neighboring states.

"This is not a time to bypass risks, it is the moment to face them," Jobim said Friday.

Brazil's President Luiz Inacio da Silva said his government will do all it can to support the government of Rio de Janeiro in its fight against drug gangs.

Antonio C. Costa, president of Rio de Paz, a local NGO, drew attention to the civilian victims of the clashes and blamed Rio's state government for creating a so-called "urban Vietnam" in the city -- the future site of the 2016 Summer Olympics.

"The world's eyes are on Rio de Janeiro, praying that we find a solution to the security crisis, but also intent on knowing whether we are handling this as civilized people," Costa said.