Spreading cholera has claimed at least 1,415 lives in Haiti 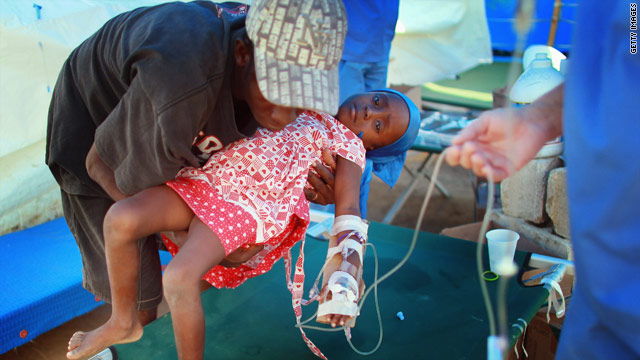 A Haitian child being treated for cholera is placed on a cot at a Samaritan's Purse facility in Cabaret, Haiti, on Tuesday.
STORY HIGHLIGHTS
RELATED TOPICS

Port-Au-Prince, Haiti (CNN) -- Pivotal elections will proceed as planned in Haiti despite the cholera outbreak that has now sickened more than 60,000 people and threatens to keep spreading.

The death toll now stands at 1,415, the Ministry of Public Health and Population reported Wednesday, citing data collected as of November 20. More than 25,000 people have been hospitalized.

Some of the 19 presidential candidates have urged a postponement of Sunday's vote. But Ken Merten, the United States ambassador to Haiti, said the election process was on track.

He said 250,000 new voters were registered and more than 11,000 voting stations have been identified in the fifth presidential election since the fall of the Duvalier dictatorship and the first key moment at the polls since the devastating earthquake in January.

"We have a cholera problem here, which is something that the Haitians and we are all grappling with, which is a major public health challenge here," Merten said at a news conference Tuesday. "And we have the elections which should take place, need to take place, and we are here to support that effort."

Meanwhile, the Pan American Health Organization said it was planning to treat 400,000 cholera cases within the next year, up from a previous estimate of 270,000 over several years, as a result of the outbreak in Haiti.

"We need to plan for up to half of those cases occurring in the next three months because of the explosive nature of this epidemic," the organization's deputy director, Dr. Jon Kim Andrus, told reporters in Washington on Tuesday.