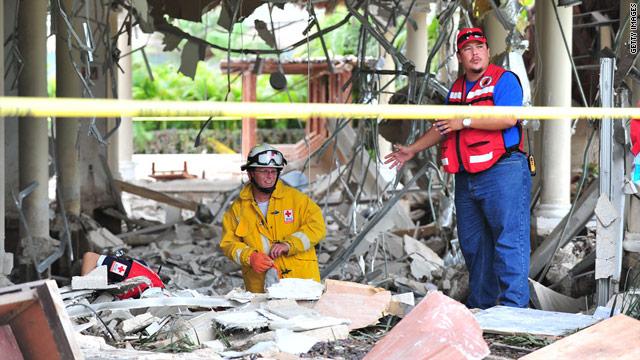 Investigators gas from a nearby mangrove swamp was behind the explosion that killed seven people at a hotel Sunday.
STORY HIGHLIGHTS

It was originally thought that a gas line or stove in a kitchen was the source of the explosion, but now investigators believe an accumulation of gas from a nearby mangrove swamp was behind it, Attorney General Francisco Alor said.

"The decomposition of organic residues in the area created gas that accumulated," he said.

Five of the victims were Canadian tourists and two were Mexican employees of the Grand Riviera Princess resort. About 15 other were injured, six who remained hospitalized in stable condition, Alor said.

In addition to the swamp gases, Alor said investigators are examining a leaking pipe that was filtering wastewater underground in the area. The collection of wastewater could also have created gases that could have ignited, he said.

The attorney general cautioned that until the investigation is done, it is too early to say whether the explosion was the result of naturally occurring gases or if the hotel was criminally negligent in some way.

Some have already cast doubt on the swamp gas theory.

The local representative for Mexico's Ministry of Environment and Natural Resources, Gabriela Lima, said she was convinced that the explosion happened because of the hotel, not the environment. If swamp gas was the culprit, similar explosions would be common throughout the state, which isn't the case, she said, according to the official Notimex news agency.

"I'm 100 percent certain that this was a problem with the hotel, with its installations," she said.