Exclusive: Passenger says she warned crew about man in disguise 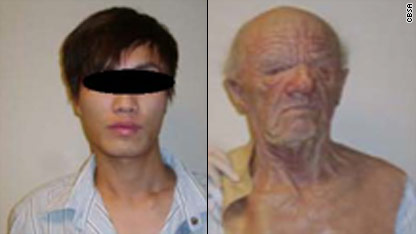 Atlanta, Georgia (CNN) -- A passenger on the Air Canada flight in which a young Asian man boarded disguised as an elderly man says she tried to warn the crew about the mask but was rebuffed.

Nuray Kurtur-Balas said she approached three flight attendants before take-off from Hong Kong, but nothing was done.

"I thought he was going to harm the plane," Kurtur-Balas, 35, told CNN. "I kept my iPhone in my pocket to call my family if something happened."

Officials said the man apparently boarded the plane wearing the mask and removed the disguise during a trip to the plane's restroom while it was in flight.

In a statement e-mailed to CNN, Air Canada spokesman Peter Fitzgerald said, "Our crew took the necessary measures in-flight to ensure that CBSA (Canada Border Services Agency) authorities met the aircraft at the gate upon landing."

Kurtur-Balas, a clothing retail production manager, contacted CNN after reading an article about the incident and provided a copy of her boarding pass to confirm she was on the flight.

The incident was so bizarre that when she returned home and told her husband what happened, he didn't believe her.

"He said, 'You are watching too much 'CSI' and 'Criminal Minds,'" she said.

The incident happened on October 29, which coincidentally, was her 35th birthday.

The Asian man in his early 20s boarded the Air Canada flight from Hong Kong wearing an elaborate silicone mask of an elderly man, according to an alert from the Canada Border Services Agency. After the plane landed in Vancouver, he was questioned by officers from the agency. The man requested refugee protection and admitted that he boarded the flight in the disguise.

Chuck Strahl, the Canadian Minister of Transport, Infrastructure and Communities, said both Canadian authorities and Air Canada are conducting investigations into the incident.

"Obviously, we are very concerned about what happened and will be taking whatever steps are necessary to make sure it doesn't happen again," Strahl said.

Kurtur-Balas said she was returning from a business trip in Hong Kong and first noticed the man when she was walking to the restroom before the flight took off. She said she was 10 rows in front of him. He was sitting in a middle seat near one of the restrooms, she said, and the crew was trying to get him to stand up so another passenger could get to her window seat.

"The lady was trying to get to her window seat, but he wouldn't move," Kurtur-Balas told CNN. "He wouldn't move or understand what people were saying. Two flight attendants were trying to talk to him. I was standing there trying to go to the restroom. Finally, he stood up, and he came towards me and I just showed him with my finger where he was supposed to sit."

When she left the restroom, she said, she noticed that he was wearing a mask and that his hands appeared much younger.

"It wasn't a real person's skin. It looked plastic," she told CNN. I said to the flight attendant, 'Did you check out that person's hands? They seem like they belong to a 20-year-old kid. There are no wrinkles.' She said 'good observation.'"

After not getting a response, she said she spoke to a second flight attendant.

"Did you check it out? I'm feeling nervous going on this flight," she said she told the attendant. "He said 'We'll look into it,' then again nobody said anything."

Finally, she said, she spoke to a third flight attendant before the plane departed Hong Kong. The attendant told her the man had not done anything wrong and explained he may have a medical condition.

"I was thinking the whole time he was wearing a mask," Kurtur-Balas said. "Why would somebody wear a mask if they have a medical issue?"

"I was thinking he was going to blow the plane up. I know it sounds crazy, but that's what I thought," she said. "I wouldn't feel nervous if he was just a guy trying to go to Canada and file to become a refugee."

Kutur-Balas said she kept looking back at the man during the flight, but after several hours, she said his seat was empty and she didn't see him.

About half way through the flight, she said attendants seated a young Asian man in the empty seat next to her. She said the man was wearing a striped blue shirt. Photos of the Asian man with and without the disguise were contained in the alert from the Canada Border Services Agency about the incident. She said she could not be sure, but it could have been the same man who was moved next to her during the flight.

"The flight attendant said this guy's seat was not working so they sat him right next to me in the middle seat," she said.

After the plane landed, she did not see the man again.

Last week, when she was downloading the CNN App for iPhone, she read the article about the disguised man.