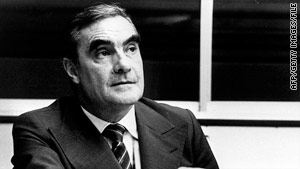 Emilio Massera, known as Admiral Zero, was one of the most brutal enforcers of the "Dirty War" against lefist factions.
STORY HIGHLIGHTS
RELATED TOPICS

(CNN) -- Emilio Massera, a former admiral who was part of a military junta that ruled Argentina in the 1970s, died Monday in the hospital where he had been for some time, the state-run Telam news agency reported.

The ex-dictator carried a legacy of being one of the most brutal enforcers during the country's "Dirty War," in which the military government sought to purge leftist factions in the country.

At the time of his death he was not convicted of any charges, though previously he had been sentenced to life for human rights violations. That sentence was dropped as part of an amnesty declared in the 1990s. The amnesty was later repealed, but Massera's health had deteriorated to the point that he was found unfit to stand trial.

He died of a respiratory failure, said doctors at the Naval Hospital where Massera was being treated said. He was 85.

Massera was infamous for running the Navy Mechanics' School, one of the most notorious detention centers during the dictatorship. Known as "Admiral Zero," victims at the mechanics' school were reportedly tortured and killed, and babies were stolen from some victims. Some of the victims reportedly were thrown from planes into the ocean.

Massera took part in the overthrow of President Isabel Eva Peron in 1976. Together with Jorge Videla and Orlando Agosti, Massera formed the junta that ruled Argentina.