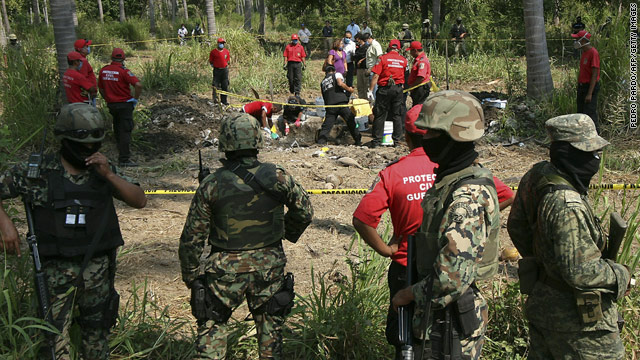 Ten bodies have been pulled from the mass grave near Acapulco, Mexico. Authorities say they expect to find more bodies.
STORY HIGHLIGHTS

(CNN) -- Mexican authorities have recovered 10 bodies and expect to pull out more from a mass grave in a village outside of Acapulco, the state-run Notimex news agency reported, citing police.

The director of the state ministerial police, Fernando Monreal, said that operations at the grave were ongoing.

There was speculation that the bodies were those of 20 Mexican tourists from Michoacan who were kidnapped from a bus in Acapulco in September. The link was made by a video that surfaced on the internet Wednesday showing two men being interrogated about the kidnappings. They say that orders were given, presumably by their drug cartel bosses, to bury the bodies locally, in the town of Tres Palos, just outside of Acapulco.

The mass grave was discovered in Tuncingo, which is adjacent to Tres Palos. The source and the authenticity of the video could not be confirmed by CNN.

Monreal said that it was too early to determine whether the kidnap victims and the bodies were the same. He said they expected to retrieve more bodies from the grave.

The kidnapping of the 20 in the resort town alarmed many, but some reports and analysts, including the global intelligence company Stratfor, have posited that the victims were not tourists after all, but members of a drug cartel.