Cholera death toll near 300 in Haiti 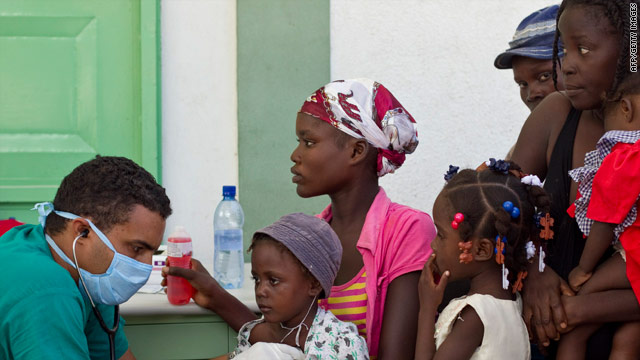 Doctors receive hundreds of Cholera patients per day at the hospital in L'Estere on October 26, 2010.
STORY HIGHLIGHTS

Are you in Haiti? Please share your photos and videos with CNN iReport.

(CNN) -- The death toll from Haiti's cholera outbreak has risen to 292, the Haitian government said Wednesday. There are 4,147 confirmed cases.

The 1991 cholera epidemic did not reach Haiti and many other Western Hemisphere countries, Andrus said, indicating citizens thus did not learn about crucial sanitation measures.

"We are seeing a very rapid, very explosive outbreak with a very steep academic [learning] curve," Andrus said during a conference call Wednesday.

Video: Signs of hope in Haiti

The goal is to provide 24-hours-a-day medical care, Andrus said.

"It will take some months to turn the tide," he said, indicating health officials can expect cholera cases in Haiti for the next several years.

Although there are no confirmed cases in neighboring Dominican Republic, health officials are there to help it prepare for likely cases.

Calling Haiti's cholera outbreak "an extremely serious situation," a United Nations official expressed concern Monday that the infectious disease could spread and grow to "tens of thousands of cases."

Volunteer Susan Dennery of Phoenix, Arizona, who was just in Haiti, told CNN the number of patients needing treatment has remained high.

"It was very sad," the medical ultrasonographer said of a triage center in Artibonite. "They are distraught. They don't complain."