Spirit of the dead alive and well in Haiti

By Hamilton Morris and VBS.TV staff 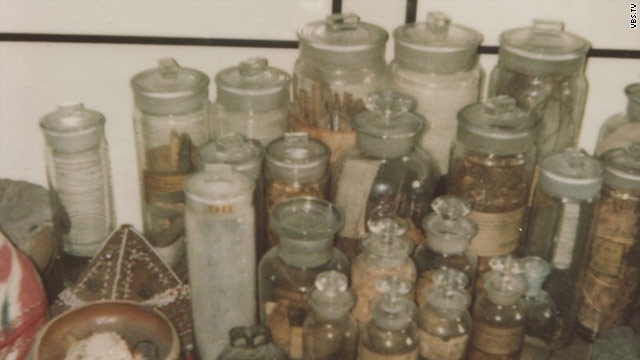 Editor's note: The staff at CNN.com has been intrigued by the journalism of VICE, an independent media company and website based in Brooklyn, New York. VBS.TV is Vice's broadband television network. The reports, which are produced solely by VICE, reflect a transparent approach to journalism, where viewers are taken along on every step of the reporting process. We believe this unique reporting approach is worthy of sharing with our CNN.com readers. Viewer discretion advised.

Brooklyn, New York (VBS.TV) -- American soldiers returning from Haiti in the early '20s and '30s came home with arresting tales of voodoo potions, black magic, and living-dead zombies. They published their stories in mass-market pulp novels, which in turn inspired horror movies and eventually made their corporeal way to our supermarket aisles during Halloween.

But back in Haiti, zombies are real still. Late last year, just prior to the devastating 7.0 magnitude earthquake that ravaged the country, VBS producer Santiago Stelley-Fernandez, a camera crew, and I headed to Port-au-Prince in search of the undead, known locally as Nzambi.

We had investigative forbearers. In 1937, American folklorist and anthropologist Zora Neale Hurston traveled to Haiti and encountered the case of Felicia Felix-Mentor, a woman who villagers claimed had died in 1907 at the age of 29 but had returned to the living 20 years later. Hurston investigated the rumors and discovered evidence that powerful drugs were used to replicate a death-like state.

See the rest of Nzambi at VBS.TV

In 1982, scientist Wade Davis traveled to Port-au-Prince to research the ethnobiological base of the Haitian zombie, procuring the secret poisons used in the procedure and discovering that the undead are far from a folkloric myth, like vampires or werewolves. He concluded that voodoo priests were employing a concoction of tetrodotoxin, a chemical derived from the puffer fish that produces paralysis and can mimic death -- it is 100 times as deadly as cyandide, and something I have a longstanding interest in.

After zombification, a mind-controlling drug made from a plant called Datura stramonium was administered to the patient. Despite unlocking the chemical basis of this phenomenon, however, Davis maintained that zombification was not created purely through these poisons, but indeed relied on a tradition of voodoo sorcery hundreds of years old.

Thirty years later, and under the guidance of a massive local man who had survived fourteen bullets to the face, I was off to conduct my own zombie investigation. I traveled the countryside, spoke with sorcerers, and collected (and consumed) samples of the legendary poison. I went heavily armed into places that require you to be heavily armed. After months of labor, rigorous chemical analysis of the samples, several incidents that had our entire party mortally afraid, and untold numbers of night visions at the hands of total zombie preoccupation, we're finally ready to share our findings.