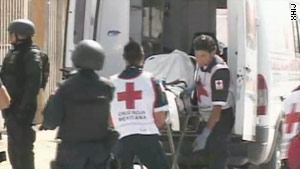 (CNN) -- The FBI is investigating the death in Mexico of a man who was a U.S. service member, an agency spokesman said Thursday.

"The Texas National Guard family has lost a friend and fellow soldier and he will be missed, but more importantly the soldier's family mourns the loss of a loved one," the Guard said in a statement. "At this time there is no more important and honored duty than to surround the family with our love, and support them through this very difficult time."

Hernandez was a student during the week and reported for National Guard duty on weekends and annual training.

The FBI is working closely with the U.S. Army Criminal Investigation Command, said FBI spokesman Michael Martinez, who is based in El Paso, Texas.

Hernandez was killed during a drive-by shooting, according to the Chihuahua Attorney General's office.

Ciudad Juarez is in the Mexican state of Chihuahua and shares a border with El Paso.

Juarez is Mexico's bloodiest city, with more than 2,500 drug-related deaths reported this year. Nationwide, more than 28,000 people have died in drug violence since December 2006, when President Felipe Calderon took office and started his stepped-up campaign against organized crime.

Because of the violence, Juarez is considered off-limits for the U.S. military. A memorandum at Fort Bliss in Texas prohibits soldiers from traveling into Chihuahua.

In November, a member of the U.S. Air Force was among six people killed when gunmen entered a strip club in Ciudad Juarez and opened fire.

Hernandez was standing on the street by a car when he was shot by gunmen about 1 p.m., Mexican authorities said. A second person, Rafael Ramirez Reza, 22, originally from Juarez, was also killed, said Carlos Gonzalez, spokesman for the Chihuahua Attorney General's office.

A third person who was not identified was injured in the shooting, Gonzalez said.

A local newspaper, El Diario, said Ramirez was negotiating a car sale when he was shot.