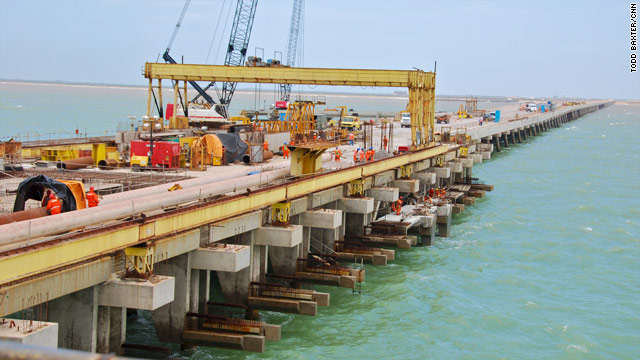 Brazil's Acu Superport off the Atlantic coast will be one of the biggest ports in the world when it's completed in 2012.
STORY HIGHLIGHTS

Nicknamed the "highway to China," the $2.7 billion port will be one of the biggest in the world when completed in 2012.

Eike Batista, a mining mogul and Brazil's richest man, dreamed up the idea for the Acu Superport because he was fed up with the delays in getting iron ore from his mines onto ships bound for China.

"Land your cargo at a port and if it's a container, it may stay there for 30 to 60 days," Batista told CNN in an interview.

He ended up building a port and industrial complex that will be bigger than Manhattan and already is luring foreign and domestic investments.

"Brazil is a gigantic opportunity to arbitrage inefficiencies," he said.

Brazilian President Luiz Inacio Lula da Silva has visited the complex and so have a number of Chinese officials and business leaders.

LLX, Batista's logistics firm, ferries visitors out to the terminal in a helicopter, flying 400 kilometers (249 miles) north of Rio de Janeiro along the sparsely populated coast.

A cement causeway juts 3 kilometers (1.8 miles) into the ocean. It will boast a four-lane highway, pipelines and conveyer belts to move iron ore, soybeans and oil onto waiting ships, feeding China's insatiable appetite for raw materials.

Back in his office overlooking Rio's scenic Sugar Loaf Mountain, Batista insists the project is more than a pipeline to China.

"This is a story about connecting Brazil to the world. Because for the last 20 years, why haven't German companies or European or American companies come to Brazil?" he asks. "Very bad logistics."

Brazil's clogged roads and ports add billions of dollars to the cost of production every year. Analysts say improving the country's infrastructure will be one of the main challenges facing Lula da Silva's successor. Brazilians will elect a new president in a runoff vote October 31.

"This year the economy's growing at about 7 percent," Batista said. "The reason why we cannot eventually keep it up is because of bottlenecks. But bottlenecks are opportunities."

He says the Acu Superport has turned into a two-way highway, also attracting investment from China and other countries.

A cement factory, energy plant and oil treatment unit are also in the works.

And if all goes as planned, workers here eventually will put their stamp on a new all-Brazilian car company aimed at the country's booming domestic market.

"China has come up with its own brand of cars, so has India. Why not Brazil?" Batista asked.